Ashley's Spotlight Book: The Witch is Back by Stacy A. Moran 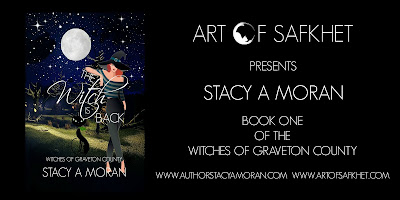 Title: The Witch Is Back
Author: Stacy A. Moran
Amazon Purchase Link: HERE

Tabitha Ashworth is a lot of things, a daughter, a writer, and a reluctant witch. She was also a runner, not a grab your tennis shoes, let's take on a marathon kind of runner.

No, she has been running from her past and her heritage her entire life. She's avoided her hometown for nearly a decade but after a cryptic call from her mother, she is summoned back home.

From the moment she arrived back in Graveton County she was flooded with her past and realization her running days are over.

Welcome to Graveton County where the haunted town is make believe but the witches are real. 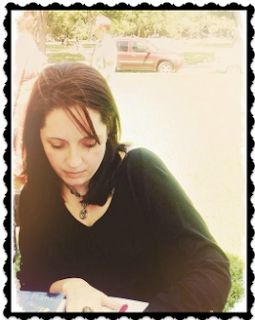 Stacy (SAM) was born in West Virginia but now finds herself living in Texas. She has loved writing since she wrote her first book in the first grade, The Land Without Rules. Her mother will tell you it was a brilliant piece of literature.

She has a flair for creating not only unforgettable heroes and heroines but also her villains are characters you want to get to know and will fall in love or hate with. 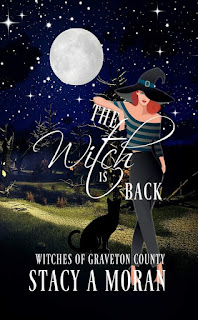 “I DON’T BELIEVE it. Gigi would never kill someone. Mutilate or curse of course but kill? No way.” Samantha assured, her bright blue eyes locked with mine.
“They are framing her. I bet the busybody Mrs. Billings started this whole thing. That woman is really evil; she has always hated our family.” Serena protested. “Gigi is wicked, devious, sneaky, and mean but she is not a murderer.”
“At least not to those who are outside of the family,” I smirked. She loved torturing her family, especially her granddaughters. I sat back in the maroon wing back chair in the library; my eyes danced around the room. Nothing has changed since I was a child, the same oil paintings framed in gold frames, small sculptures, oriental rugs, and vases filled with wild flowers. It was reassuring that nothing has transformed.
“Boy, that’s the truth?” Samantha replied with a snort.
I continued to listen to my cousins and my aunt claim Gigi’s innocence. My mother was picking Gigi up at the police station. She tried to post bail last night, but Gigi had to stay in jail overnight before they could get a judge to take the bail hearing. I bet she is going to be a treat when she gets out. She was probably plotting revenge all-night.
They were right, though I didn’t believe she did it either. Honestly, not because I didn’t think she was capable of it but mainly because she liked to watch her victims squirm. She wants to play with them. I should know I have been on the receiving end of her game enough times. “She’s more hands on, killing would be too easy for her,” I said.
“That’s right girly. I like to watch them squirm.” I turned to see Gigi and my mother standing in the foyer adjacent to the library.
“Exactly, what I was thinking.” I rose and walked over to Gigi, she wrapped her arms around me and squeezed tight but only for a few seconds. “That’s enough; you were always so needy. Hug your mother.” She agreed walking past me, flopping down on the sofa beside Samantha.
“Do, I get a hug from my daughter?” My mother asked, her head cocked to the left and her hands on her hips.
“Of course.” I kissed her cheek and hugged her. I breathed her in, and yes, I know that sounds goofy, but she smelled like home. “I missed you, mom.”
“I couldn’t tell; it’s like pulling teeth to get you back here.” She patted my back before breaking the embrace.
“She’s too busy being a famous author. She has forgotten all about us.” Serena smirked.
“That’s not true,” I exclaimed.
“She must be embarrassed by where she comes from,” Samantha snickered.
“Embarrassed? Why would she be embarrassed?” My mom asked.
“I’m not.” I defended.
“Are you too good for your family now?” Aunt Esmerelda asked.
“What? Why would you think that?” I asked totally shocked by this questioning. Where had it all that come from? Then I noticed Samantha and Serena snickering. Annoying witches. They set me up just to watch me squirm. So much for cousin comradery. “Both of you are dead.” I narrowed my eyes at them.
“And so, it begins,” Samantha snorted, clapping her hands.
“I hate you,” I muttered.
“Oh, please you love me and missed me most of all.” She replied, grinning.
Ignoring her, I sat back down in my chair. Aunt Clara jumped into my lap; she took off as soon as we arrived. I thought she would be out for the night. “Where have you been?” I asked, petting the top of her head. She hissed at my touch, but the moment I stopped, she used her head to bump my hand, demanding I start petting again. Crazy cat.
Turning, my attention to Gigi. “So, did you, do it?”
“TABITHA!” My mother yelled.