When my book was just an Idea... 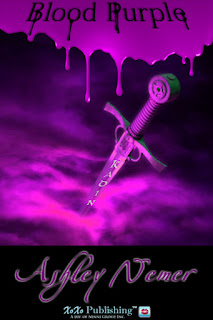 How did Blood Purple come to be?

April 1, 2011 I became a statistic, It was for the first time in many years that I was part of the ‘unemployed’ citizens of America. What did this mean? It meant I had a LOT of spare time on my hands. In between the constant online job applications and reading about how to find work I came up with an idea. An idea I hope changes my life. I had just finished re-reading John Matthew’s book in the BDB series when it kinda hit me, I think I could write a book with vampires.

I was chatting with Ann, my nurse friend when the idea spurted a root in my mind and I asked her opinion. Obviously she loved it as she became my very first Beta Reader. Now there are hundreds of vamp books out there and I wanted mine to have something different, a competitive edge, something to differentiate it from JR Ward, Sherrilyn Kenyon, Ann Rice, Charlaine Harris and so on. So I went into Google and typed in “Arabic Vampire.” Hardly anything showed up, two words Algula and Ghul. That’s it. And those two sites provided very little information at all.

Now you might ask, why Arabic Vampires? Well, my aunt and I had been for the previous year discussing our heritage in Lebanon. The stories of our family and the original Christian tribes that were in Lebanon or the territory now called Lebanon really. What happened with them and where they are they today. So with both ideas on the forefront of my mind I thought, Why not combine the two.

Ann helped me research names. I wanted the name’s meaning to be part of the personality of the character. There were hundreds of name sites so Ann and I picked one Arabic name site and rolled with it. I bounced my ideas off her and slowly we ended up with our first characters: Zayn, Nikole, Hashim, Afaf, Haydar, Nasir, Ikram and Tamman.  Then we had to pick a back story for each one. The hard part was I wanted Haydar to be a father and have children but I didn’t want them of Arabic origin in names, so we found a reason to move him to England and that birthed his wife Sarah and the kids, Leigh, Derrik and Dominic.

Next we had to pick a city in Lebanon. Once again Google is my friend. Ann asked me, “What kind of city do I want?” I had to stop and really think about this. You see my aunt explained the tribes were chased out of their homelands and pushed into the mountains during the Muslim invasions of the 600’s. So we set out to find a city in the mountains. I wanted a city with a past one I could work into the antagonist’s story. Zahle, Lebanon is located in the mountains and burned down in 1777 it was a perfect fit.

Now the essentials had been thought out and discovered and it was time to sit down and write. All in all around April 25th the first three chapters of Blood Purple had been born.

I found a new job and summer life got busy. I stopped writing and focused on other things. In August I was talking with my friend Teri and she demanded to see the first three chapters that I wrote. She told me they were fantastic and to keep writing. I still think she was crazy but people have told me the book is well written and a good read.

Would I change anything? I’ve been asked this before and initially my answer was no. After some feedback from a bit more of my friends I think I would have re-written the initial three chapters. When I started Blood Purple my writing was very raw and it starts off a bit slow. Chapter 4 picks up and the action begins and the rest of the book is an easy fast read. So in hindsight I think that’s what I would have to say. But you know everyone has things they wish they knew then that they knew now. It’s my first book; it’s a great first book. The second one is even better. (I’ll be blogging about that next week.)


Blood Purple, coming out September 25th, will you be one of the first to experience a whole new Vampire?