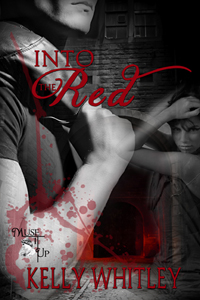 Hello and welcome to the 3rd stop in Sensuous Promos Book Blog Tour for Kelly Whitley’s, Into The Red. Throughout this blog hop – which runs October 1st through October 28th – there will be 5 stops. At the end of which all commentators (from all the blog stops) will be eligible to win a free eBook copy of Into The Red. The winner will be announced on October 29th in the evening and posted in the comments sections of all the stops. Please remember to leave your email address so we can contact the winner and get you your prize!

Once upon a time, Kelly dreamed of becoming an entomologist, then a gymnast, and then an architect. Instead, a career in healthcare became the chosen path. After years of devouring other people's books, she decided to give writing a try. An arduous journey and many hot fudge sundaes later, her first paranormal romantic suspense debuted in July 2012.
Now she writes a variety of fiction, spanning the genres from humor to paranormal, and flash fiction to full-fledged novels. A career in the medical field and interests like painting and home restoration provide plenty of inspiration for the characters who find themselves populating her stories.
An ideal day consists of coffee, no phone, and writing quirky characters for her fans to fall in love with. Stop by www.kellywhitley.com, where the paranormal is an everyday occurrence and get your fix for vampires, werewolves, shifters and more. Kelly loves visitors, human and otherwise.
Kelly lives in the Rocky Mountain Midwest. Contact her at kelly_book_maven@yahoo.com.

Blurb:
Human blood is an illicit and highly addictive drug--if you're a vampire. Known as Red, its side effects are insanity, and eventual death. A group of Red-addicted vampires known as Poisoners are killing women as part of an extortion plot involving a lost ancient vampiric tome, and they’re leaving a trail of bodies in their wake. The discovery of each new victim risks exposure of the entire vampire race to humans. Then one victim survives…
Dr. Evan Nichols, oncologist and vampire, lives a monk-like existence, by his own choice, focusing on patient care and research to benefit his vampire brethren. It’s been twenty-five years since his world turned upside down—the night he lost his fiancee and discovered his hidden vampire heritage. Now his government has ordered him to take a mate—or they’ll choose one for him. It’s a horrible prospect, and one that might push him over the edge—until Fate throws him together with a human female.
Wary of relationships, Tara West has poured her energies into work and inventing cutting edge climbing equipment. She doesn’t like the gorgeous Dr. Nichols, yet finds herself unaccountably drawn to him.
When a crazed vampire attacks and poisons Tara, Evan rescues her. With time running out, he has to create an antidote to the poison before he loses his chance at love.
In order to make the vaccine which might cure her, he has to find the bastards who poisoned her and take their venom—before they die of their addiction. If he doesn’t reach them in time, saving her will be impossible.
Thus the journey begins—into the Red!

Excerpt:
Her eyes closed half way, the dilated pupils darkening the hazel. The bedroom expression from his drawing. She shifted toward him. “Win?”
He moved close enough to whisper in her ear. “Win.”
He bent his head to the hollow of her neck and inhaled, pulling her scent inside him. God, she smelled good. Clean, floral, and female. He had to know what her lips felt like. One kiss. Just one, and he’d go.
The atmosphere charged—equal parts anticipation and need.
Not a good idea, no matter how much he wanted it.
He should leave now.
Evan drew back and caught a glimpse of her tongue moistening her lips. Control slipped away, and he buried his hand in her hair and pulled her in for a kiss.
The first brush of his lips on hers, an electrifying sweep, shrank his world down to the two of them.
Her mouth had the perfect balance of heat and tenderness, fitting perfectly with his. Jesus, he hadn’t experienced this for so long, and it felt so good. He pressed his lips more firmly against hers. Slender fingers wove into his hair, and pleasure cascaded down his back and set off pressure in his groin. God, he should stop.
He pulled her into his embrace.
Damn good to hold a woman, warm and vital, after all these years of a cold and solitary existence. Tara had awakened a hunger, and he hadn’t realized the degree of his starvation until now. He had to get a taste of her.
He teased her lips with his tongue, and groaned in delight when she sighed and allowed him access. A flavor explosion—orange juice and chocolate chip cookies and steamy human woman, hot and vital. He stroked her tongue, penetrating, probing, shifting his mouth over hers to deepen the dance.
Tara gripped his shoulders, each one of her fingernails triggering tiny sparks of pleasure that flashed down to the small of his back.
Her enthusiasm was unmistakable. She wanted him too.
What would she feel like under him, his body buried in hers? Blood pulsed through him headed for destinations south, and his erection throbbed in readiness, shoving against his zipper.
Too fast, needed to slow down before his libido went off the rails.
As if sensing his thoughts, Tara broke the kiss but didn’t pull back. The heat of her breath warmed his jaw. At least one of them had sense.
Nope. He hadn’t gotten enough.
He captured her lips and mated his tongue with hers, and electric anticipation spread out across his skin. The fragrance of arousal poured off him, smelling of smoky bergamot, the unique signature of claiming and possession.
A mating scent. A whiff of answering desire hit his nostrils.
Had to get her closer, get his essence on her skin. He wrapped an arm around her waist. Soft breasts pressed against his chest, moving in concert with his breathing, and pushed desire to need.
So. Damn. Good.