Why I love Economics 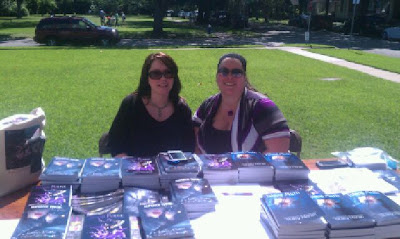 This was how our day started out.The sun beating down on our backs, the atmosphere friendly and welcoming, and two authors anxiously awaiting their public debut.

The book festival was great, not just for the experience of selling our books but for the interaction we were able to have with readers. Probably the most surprising part of the talks with the various people was how many men were actually interested in our stuff. I don't think either Stacy nor I expected to maintain the attention of men with our books initially.

It was obvious that the history we put into each of our books was the draw for people.

One challenge I found I had personally during this was explaining Blood Purple. For those of you who have not read it let me attempt to explain what is behind my debut novel.

The setting starts off in Lebanon (that's in the Middle East for those that don't know) in the year 500A.D. Hashim has just given the throne to his daughter Ikram on his death bed when her brother, Haydar, discovers this and declares war on his sister and her descendants. We then move to present day Colorado Springs where King Zayn and Pricess Nikole have to battle against their uncle and his children.

Blood Purple is not your everyday Paranormal Romance. I DO NOT focus on the 'vampire' aspect of the Algula race. I focus on the relationships each characters have with one another, specifically Zayn and Nikole. In most romance novels you have, boy meets girl, girl needs help, boy saves girl, girl falls in love, they live happily ever after.

Yes, Nikole does get in trouble and yes technically boy meets girl in a bar ... but that's just the set up. The series follows Zayn and Nikole, not their individual lovers. It's their story about how they save (or don't save) their people. How they interact with their cousins, uncle and their subjects.

Because of this, my book feels more Science Fiction.

I also take the history of the world and use a concept I learned in Economics, The Invisible Hand Theory, and explain all of the events throughout human history.

Gods (made up ones) came to earth and created the Algula (Arabic for Vampire) who in turn, created humans in their likeness. The Algula were responsible for everything that happened in our world. Many Algula look at humans as cattle, food and entertainment to be used for their liking. This causes Haydar and his children to meddle in events such as the Gulf War, the Burning of Atlanta, the Muslin Invasion in the Middle East in the 600's, etc...

For those of you who don't know what the invisible hand theory is - that's where there is some unseen force (greed, power etc) guiding someone the decisions that are made. This was coined by Adam Smith in the 1700's who is known as the Father of Modern Economics. (Can you tell I have a background in Economics yet lol.) This concept is used to explain market behavior in business - I use an adaptation of this to explain human behavior.

Moving on ... The point is, this is my new challenge - how do I explain all of this in a 30 second spiel that will captivate my audience and make them want to invest in my Blood Series.

At the end of the day, Stacy and I were exhausted, my hubby was a trooper sitting there keeping us company all day and we got to meet a lot of really fascinating people. I am looking forward to next years event and hope that ComicPalooza is just as fun as this was.