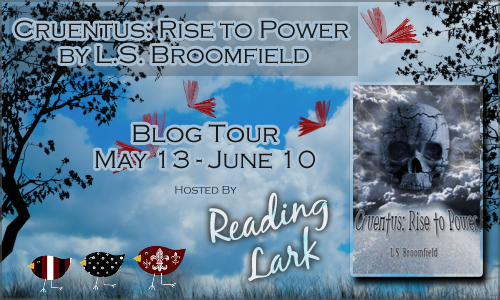 Ashley: Thank you for taking the time to come to my blog. It’s quite an honor to be the first to interview one of Ms. Broomfield’s Characters. I really wanted to learn more about you while reading her book. I almost wish she would have extended the book just a bit more so I could have gotten more from your point of view. Can you tell me, Emiliana, what your final thought was once your story was written? Did it surprise you? Upset you?
Emiliana: Overall, I was very much surprised. I was raised to blend in with others and never be the centre of attention. It appears I was never trained for this. My greatest surprise was learning the great importance I held in a scheme so great. Who would have believed a little peasant from Viterbo, Italy, would go on to be the mother of someone so great. On the other hand, I do not like being used so it certainly angered me as well. I have never been one to believe in the treachery and schemes in my world. Perhaps I was too sheltered.

Ashley: Donato, what was he like? I know we saw glimpses of him wooing you over, but what went on behind the scenes?
Emiliana: When he was not around his father, he was very much the gentle and loving man he never thought he could be. He had quite the funny side to him too. He could make me laugh with the simplest of things. When Arturo was present, the real Donato hid and the Cruentus persona slipped into place, just not as horrid as his father.

Ashley: Have you grown to love your in-laws?
Emiliana: Now that Ashley is a heavily loaded question. *She smiled* Camilla is truly on the road to saint hood being wed to that tyrant. The time has done nothing to improve my feelings for my father in law. If anything, I have grown to have a greater loathing for him.

Ashley: So, now what do you plan to do until the next installment comes out? If you are anything like my characters, they never leave me alone.  Do you insist on book time with Ms. Broomfield?
Emiliana: I will be the mother of Dragos Cruentus. I will be demanding book time. Behind every great man they say is a great woman. What they fail to mention is that the woman is their mother. So yes, I will be in book two.

Ashley: What about your parents? Are you able to spend the time with them that you want? After your kidnapping, I am sure that there is a large part of you that wants to cling to them for safety and stability.
Emiliana: I love my parents deeply, but alas a distance grew because of these events. My pappa could never let go of his guilt. My mamma was always the one placed in the middle when disagreements arose between my pappa and me. I could not sit by and let him speak so vehemently against Donato. I moved forward into a situation that began as less than ideal, that’s true, but life is all about choices. I chose to rise above and find happiness a midst everything and my pappa could not comprehend how I could do so. I remain close to my mamma, but my relationship with my pappa is still strained, though civil.

Ashley: Do you have any regrets? You were whisked away into marriage, to a man you didn’t know. Was there anyone before him that held your heart that you didn’t get to say goodbye too?
Emiliana: The only thing I regret is not being courted properly. Arturo could have been much more calculative and civilized and had Donato court me properly. Though my father in law greatly disagrees. I just believe he was afraid another gentleman caller would have provided competition. One regret in a sea of possible others, isn’t bad. I do not regret my life with Donato. It is something that no matter how unconventional it came about I would never change. He is mine, I am his.

Ashley: If you could change one thing in the story, what would it be and why?
Emiliana: I would have liked to have had Mahilios kill my father in law. *She laughed* A lady can dream Ashley.


A prophecy of old continued to burn in the embers of time; long left dormant until the Cruentus family rose above all others as darkness ascended the lands. Greed and deception were the name of the game, and Arturo Cruentus would stop at nothing as he concocted the ultimate scheme to get everything he wanted. No price was too high. The scene was set, the pieces strategically placed. The Gallo family could not come against him, and in the end Guido and Palmiria Gallo would come out the biggest losers, watching their only daughter, Emiliana, be taken away to render a debt settled. Young Emiliana Gallo, a victim of circumstance, was thrust into a world she did not understand and forced to marry a man she did not know. But what no one expected, not even Arturo, was that Emiliana and his son, Donato, would fall in love against all odds. For Arturo, love made one weak, but for his son, it was love at first sight. Donato became an opportunist in his father’s dirty schemes and did everything in his power to ensure the woman he admired for so long not only took his name in marriage, but also fell in love with him. Donato wanted it all, his gamble paid off richly, and he achieved both marriage and love. However, on the day they said ‘I do’ and the Cruentus and Gallo families were joined, Emiliana was ripped from their home like a thief in the night. An unknown force too unsettled to let the vision spill and strengthen the Cruentus family decided to do the unthinkable—double-cross the Cruentus family. Rage and disdain fuelled Donato and Arturo. Though their reasons were very different-their goal unified them. They squared off with the leader of the Russian Coven to take back Emiliana, and in the end the Russian coven paid the highest price as the leader's blood was spilled in retribution for his crime at the hands of Arturo. News spread quickly to the Magia Council, and before long Arturo was called before them to answer for his crime of murder unjustly. The Ancients of the roundtable at Mount Blanc, the mountain range bordering Italy and France, was now enacted as they listened to the tale that had unfolded. Little did they know that they were a part of the grand scheme Arturo Cruentus shrewdly planned for the ultimate betrayal.
Show more
Show less