I cannot believe this day has finally come! It is seriously a real dream come true. This duet includes my very first completed work of fiction, Wolf Pack. This baby has been through so many stages. Finally at the end of the day, this is a solid and hot short story. I am extremely proud of how far I've come in my writing and this is a testament to perseverance. Never give up - one day you will achieve what you desire.

I hope you all enjoy this duet from Lisa and I. We love our stories together and feel it backs a punch full of strong characters and sexy situations. 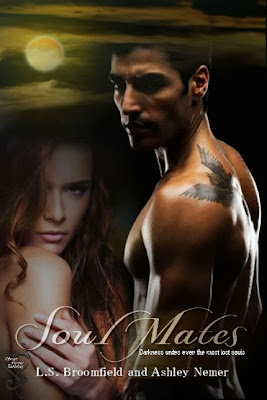 Blurb
The concept of soul mates is timeless, but what happens when circumstance comes between soul mates? Will they find their way back to each other? This short story duo packs a hard punch in the realm of soul mates, giving the reader two different paranormal erotica’s that both ask (and answer) that very question.
Wolf Pack...
Lucas, alpah-wolf and playboy extraordinaire, must face hard truths when an old love returns to town bearing secrets of her own.
Souls Caught Fire…
Katrine, vampire assassin and femme fetal, must choose between love and business when a strong and unexplained attraction blooms between herself and her current mark.
If love is meant to be and souls are bound together by fate, Lucas and Katrine must find a way to hold on to the gift they’ve each been given. When life gets in the way, will love be strong enough to unite them with their soul mates?

Excerpt Wolf Pack
His hands caressed her ass while he spread her sweet spot and pushed himself inside. The thrusts picked up speed while he kept moving his shaft inside her tight tunnel of sweet honey. Moving his hips in rhythm with hers, he hit against her ass over and over; his sac slammed on her clit, and he quickened the pace. She moaned in pleasure, but for only a moment. He reached over to her hair and pulled her body up to his chest.
Leaning into her ear, he snarled, “Don’t you cum until I tell you to.”
“Yes sir,” she groaned out. He could tell her need was at the edge of exploding because her cries grew louder with each thrust.
He reached his arm around to her front and cupped one of her breasts, running a finger along her areola, rolling her nipple with his thumb and forefinger. He felt it perk and harden in his hand. He tweaked her full nipple while his mouth dropped to the crease of her neck. She tilted her head, allowing him to bite her. From the sounds of her moans he knew she enjoyed the pain and pleasure equally.
His sac grew hot and heavy as he started to feel the pressure build inside it, making him give an intense growl. “Cum, now!”
A howl escaped both of their mouths, and at the same time she began milking his orgasm with her walls, making them tighten around his cock. They rode their climaxes out before finally collapsing onto the ground. He rolled off of her and onto his back, looking up at the stars.
“You were right,” she panted out, trying to catch her breath.
“Told you, the chase is the best part,” he said while licking his lips and staring at her.
“What is your name?” She looked at him with a questioning desire. It was apparent she wanted more than just one night.
“Lucas, my name is Lucas Miser.”

The red sateen rode up her soft thigh, showing more and more of her skin. Marcus’s body pressed tighter to hers, his hips gyrating, grinding against her. The quick shallow breaths that panted from Marcus told Katrine just how into her he was. Though the need for release sat heavy within her, reaching a level close to desperation, it wasn’t Marcus who she would be picturing between her thighs or buried deep inside of her. Was that bad? A heady desire staggered deep in her gut as a rush of wetness soaked between her thighs. That feeling alone nearly had a yes ripping past her lips despite her one cardinal rule: don’t mix business with pleasure. Never before had the thought even occurred to her of breaking her rules before meeting Thomas Rykers just weeks prior. Damn him!
A sigh shuddered through her barely parted lips, and as much as Katrine wanted to give in, as much as her body craved this release, she couldn’t. Some lines were never meant to be crossed.
Marcus nuzzled against her neck, hands skimming dangerously high on her thighs. Katrine warred against herself.
“Just let go,” Marcus pleaded, his voice labored with desire.
A pleading tone was there and that snapped Katrine back to her reality. Weakness was not sexy. Not at all. She licked her lips slowly, words ready to spill forth, keyed to rebuke his advances. That was until someone cut through the haze with the subtle clearing of their throat behind Marcus.
“Marcus, you really should lock the door when you’re with your wife,” the intruder teased.