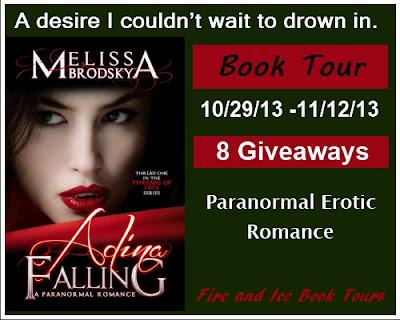 Please welcome Melissa Brodsky to Memories in a Box!

This novella is intended for Mature audiences only. There are scenes not suitable for readers under the age of 18.

Thread One, Adina Falling, is the first novella in the Threads of Fate Series.

Best-selling erotica author, Adina LaCroix lives a fairly charmed, normal life. Born a Vampire , Adina is forever 21. She is successful, beautiful and wealthy, the envy of women and the object of desire for men. Her days are occupied with more human pursuits such as writing and avoiding unwanted phone calls from her publisher and her mother. With nightfall, however, her Vampire nature takes over and her hunt for blood and sex consume her.

Wanting to keep her conscience clean, she refuses to kill her prey, usually men with dark secrets. Instead, she uses the gift of mind control to implant permanent fears into her victim’s minds, ones so horrific that they will live in fear of death if they continue their evil ways. It was her way of doing the world a favor.

After her divorce from Michael Diamante, one of the most power-hungry and evil vampires in the world, Adina has remained single. Threats of permanent death from Michael have made her hesitant to find a mate. However, rumors have begun circulating around plans the Elders, the governing body of Vampires, have in store for her.

Plagued by a recurring nightmare, Adina begins a quest for answers. The only problem, instead of finding what she has been looking for; Adina is faced with more questions. Questions in the form of two men, Caleb Locke and Xander Stark.

One man holds promises of undying love and passion while the other holds the key to unlocking her secrets, and maybe even her heart. 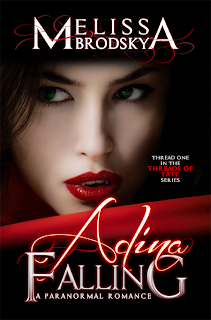 This was the first book by Melissa Brodskey that I have read. The novella started out really good. I enjoyed learning about her vampire world and how Adina has a part that is obvious in the forward movement of it but hasn't yet been revealed.

Ms. Brodskey's writing style was an easy read and flowed well. It was a breeze to get through and presented in a way that made me want to see what happened throughout the story.

I was a little lost with the scene of Adina and Caleb. I felt this whole part of the story-line was rushed through and then when the Xander factor thrown in I just got a bit lost. The first half of the book was drawn out perfectly then to have this rushed was disappointing.

The way the story ended made me want to go out in search of the next book. I want to know how Michael is involved with the Elders and why he is trying to control Adina so much. I'd like to see more of the mother too. I think I would like that character a lot.
I also wanted to note that while this is a novella inside the erotic genre - I didn't think the sexual scenes were too consuming. They had a purpose and it moved something along in the story. I liked how it was presented and really enjoyed the way Adina sampled from both genders. It was presented very well.

All in all this is a 3.5 star read for me. Had the ending not been rushed and more drawn out like the first half it would have been an easy 4 star. I just wanted more.

Downtown Birmingham was the happening place tonight. Full of sex, desperation and alcohol. Not a good combination for mortals but a succulent feast for vampires. I could sense that I was the only vampire in the city, at the moment. Most of my friends were hanging out in Detroit. They didn’t want to venture into the “burbs” this evening. No reason to really. So, I was soloing it this evening.

I only preyed on men while many of my kind were indiscriminate.  I went after cheaters and criminals, it was the least I could do to aid society. Savory characters, in more ways than one. Men with hidden agendas and dirty secrets. Like the one I was stalking tonight.  These were the ideal quarry.

Walking a little further, I felt him. Stronger. His thoughts. His essence. I knew I was getting closer to him. I shuddered again, anticipation rolling down my spine.  I probed his mind and for a moment, I actually felt sorry for his wife.  He was a prick, without a doubt.  His character didn’t matter to me, I wouldn’t be with him for the long haul.  I was simply going to use him to meet my needs, however temporarily long that would take.

Without realizing it, I had stopped in my tracks. I had arrived. Looking up at the awning, I realized I was finally at my destination. Effortlessly pulling open the heavy door, I walked down the stairs propelled by the heavy masculine pheromones beckoning me. Taunting me. Teasing me by mixing itself with flowers and spices.  I felt a tugging in my sex, a desire I couldn’t wait to drown in. 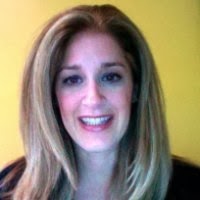 Melissa used to tell everyone she was going to be a writer when she grew up. Well, she is suddenly a grown up and it looks like she was telling the truth.
Living in a modern-day "Yours, Mine and Ours" household, Melissa is the biological mother of 3 children and the full-time stepmother to her husbands 2 children. On some days, she may even be considered "evil"...and not just as the stepmother!
With a strange vampire fascination since she was young, it was only natural that Melissa began writing stories about the Paranormal.
When she isn't writing, Melissa hangs out on Facebook way too much. And on occasion, she's been known to throw out some semi-nonsensical tweets over at @rockdrool.

Giveaway:
Melissa is giving away five copies of her book (ebooks), plus a $10 Amazon gift card and two $5 Amazon gift cards for a total of eight prizes! Enter through Rafflecopter. Starts 10/29/13 and runs through the tour.