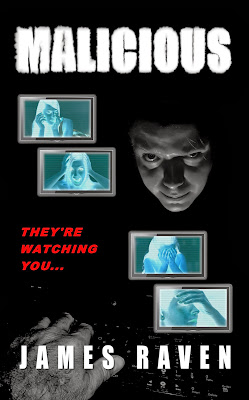 Source: Free Copy from author for an honest review

Blurb
'Cover up your webcams…or suffer the consequences.'
He calls himself the Slave Master. He spies on women through their computer webcams. Then he blackmails those who unknowingly reveal their secrets to him. His last victim was brutally murdered. Now he’s targeting the cop in charge of the investigation. To him she’s the perfect prey – because she has a sordid secret of her own.

This is the first book by James Raven that I have read and I can most definetly see myself grabbing another book in the future. I am very unsure of where to start with this review. So I apologize if I ramble a bit.

This was the second book in 2013 that I HAD TO READ and not put down. I started at 5:15 in the morning while getting ready for work and listened to it on my Kindle all day. ALL DAY! I only turned it off to help customers or other work related things and of course for dinner.

It was just absolutely enthrawling ... I am not sure which part hooked me more, that it was in Houston (where I am) or that it was so well written.

I laughed out loud when the bad guy talked about living in North Houston off of Tomball Parkway. I turned to my husband laughing so hard saying, "Hey we could be the bad guys!" Because you know, that's how I would describe our house.

Knowing that the author is in the UK, I am amazed at the details of Houston he was able to capture. Major Kudos to that!

I really wish there was a 6 star system because this book deserves that.

I loved it and I just can't speak enough about how fantastic it was.

Thank you James for giving this to me to review, I enjoyed beyond words!

1.              How hard was it for you to capture Houston being from England?
One of my daughter’s lives in The Woodlands, just outside Houston and I’ve visited the area on many occasions so I’ve got to know it a little. In my book URBAN MYTH I feature a family from Houston who visit the UK on a house swap, only to find that some pretty nasty things are going on there. Also, my book AFTER THE EXECUTION, is set in Texas and is about a fake execution that takes place at the ‘Walls’ prison in Huntsville. When I was in Houston last year I did most of the research for Malicious.
2.               How did you come up with the main character? Is she from someone in your life or made up entirely in your head?
Originally the main character of Robyn was going to be a bored housewife whose marriage is on the rocks and who has turned to online porn to liven up her life. But just as I started writing I realized that I was missing a trick and that there’d be far more tension if she was actually the detective investigating the murder. So that’s how she came about. She’s not based on anyone I know, but I did trawl internet sites and forums to get some insight into what it’s like for women who are victims of porn addiction.  I then incorporated some of those elements into her character.
3.              Riley – something’s up with him...the whole time I felt like there was more to him ... was he hiding anything?
I agree that he is a character that I could have developed more. But I took the decision not to because I didn’t want to take the focus away from Robyn and her predicament. I also wanted Riley to be a bit of an enigma so that readers would have their suspicions about him. Maybe he is hiding something and if he features in any future books we might well find out!
4.              How long have you been writing and has it always been your passion?
I’ve been writing since I was a teenager and that’s a hell of a long time! It’s always been my passion which is why I went into journalism. I stopped writing for some years because I had a young family and a job that took up most of my time. But for me there’s nothing like making up a story and creating a bunch of characters.
5.              Are your books series? Can we expect the same kind of stories in your other titles?
I do have one series of books based on a British detective named Jeff Temple. He features in ROLLOVER AND URBAN MYTH and will feature in my next book RANDOM TARGETS. Those books are published by Robert Hale of London as hardbacks and ebooks. There’s another detective character – Sam Quinn - in my book STARK WARNING. He’s head of the fictitious Celebrity Crime Squad and also happens to have a serious addiction – this time to gambling. I’m probably going to bring him back at some point. He investigates crimes committed by and against celebrities in London. I haven’t yet decided whether to do a follow-up to MALICIOUS. A lot depends on how successful the book is.
6.              Do you always write in first person? I personally loved how you laid everything out. Was that hard?
I don’t always write in the first person but I often switch between points of view because I think it helps to up the pace of a story. I don’t find it particularly easy and it can be tricky to pitch everything so it flows smoothly. I do read through everything I write quite a few times until I’m entirely happy with it.
7.              I live off of Tomball Parkway - how did you pick that spot as the point of where the killer would live?'
I picked it purely by chance. When I got to that part of the story I went to a Google map of Houston, switched to the street view and went on a little tour until I came across a street that I thought would be right. I find that Google maps are a Godsend for authors.
8.              Can you give us a brief synopsis of what your next book will be about?
My next book is RANDOM TARGETS  and is published in the by Robert Hale. It’s about a sniper who suddenly starts shooting at traffic on Britain’s motorways during the evening rush hour. He claims dozens of victims over several days. Many of them are killed in vehicle piles-ups and the country’s motorway network is brought to a virtual standstill. This book actually made my agent nervous when I sent it to her and her response was: ‘Let’s just pray that nobody decides to do it!’


OTHER WORKS BY JAMES RAVEN