Pump Up Your Book Presents: Slow Satisfaction by Cecilia Tan 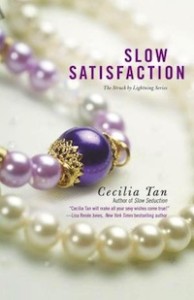 The sizzling conclusion of the Struck by Lightning trilogy! The story that began with the RT Award-winning Slow Surrender finally brings us all satisfaction. James has finally pushed Karina beyond her limit–not her limit for kinky sex play, but for his extreme secrecy. She has had enough and breaks things off.
But James won’t give up on Karina and he will do whatever it takes to get her back. He’s ready to share his deepest, darkest secrets, but is Karina ready to hear them? When James is blackmailed by an unscrupulous music industry executive, he must give in to unreasonable demands or risk exposure of his and Karina’s secret sex life… a sex life that keeps getting hotter!
Will Karina and James’s love be strong enough to withstand the many obstacles being thrown their way? 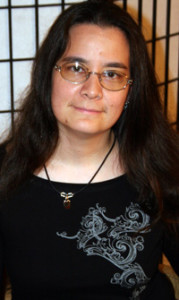 BDSM is the hot theme in Slow Satisfaction, of course, but in the book I get to write about one of my other favorite things, too: rock stars. When I set out to write a "billionaire" book I didn't want James to be something boring like a Wall Street mogul. Frankly, I didn't want him to be an asshole like a Wall Street mogul, either. So I made him an international rock star whose identity is a secret. (Think of the early days of Lady Gaga where she always wore a mask or painted her face or wore a wig so you never really knew what she looked like.) James wants to be able to walk down the street without screaming fans mobbing him.

One of the reasons the "billionaire dom" exists as a trope now is we assume once a guy has amassed a billion dollars he no longer gives a hoot what other people think of him. Those of us who aren't billionaires, though, risk being judged by our landlords, our bosses, and our families. James doesn't care, personally, what people think of his sex life, but for him the danger is what could happen to his public image if he were exposed. Would record stores refuse to sell his CDs? Would radio stations stop playing his songs? He knows this is a risk--but he finds risk exciting. So he plays with that risk, challenging himself and Karina with daring exhibitionism.

Ultimately, though, when James is threatened with blackmail and exposure, they are able to beat that challenge because of the strength of his bond with Karina. I won't give away how they do it, but I will say it *isn't* by going back into the closet!

Email ThisBlogThis!Share to TwitterShare to FacebookShare to Pinterest
Labels: Pump Up Your Book, Spotlight