Bloodlines
Book 3 of Edge of Darkness Series
by Vanessa Skye 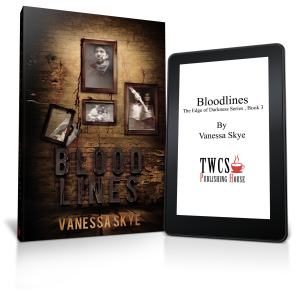 Following the acclaimed debut of The Enemy Inside and its sequel, Broken, comes the stunning conclusion to the ‘Edge of Darkness’ series by investigative journalist Vanessa Skye, Blood Lines. Detective Alicia “Berg” Raymond is lying. She’s lying to the Chicago Police Department, to her boyfriend, Captain Jay O’Loughlin, but most of all, she’s lying to herself—about her past, her future, and her ongoing addiction. As Berg investigates a series of brutal rapes and sinks under an ever-increasing caseload, she finds herself juggling every aspect of her life—finding justice for victims of crime, keeping her own sordid past buried from her colleagues, struggling with blackmail that threatens to push her over the edge, and protecting her lover from the details of all of it. Wrapping her damaged head around living in a state of domestic bliss she’s certain she doesn’t deserve, Berg is driven by the need for justice and a determination to stop a rapist before any more innocent lives are ravaged. But when enemies from the past threaten her present, she is once again vulnerable to the demons that have plagued her every day of her life. It’s only a matter of time before her lies unravel and the fairy tale she’s finally started believing implodes . . . but the biggest threat of all, as it turns out, is her very own bloodline. Can she save herself, and the casualties of crime, from the lurking darkness waiting to strike, or will her own mistakes drag her under—this time for good?

This is the first novel I have read by this author. What I really liked was the heroine in this story was flawed. She wasn't this perfect individual. But a woman who broke the law and made her choices that were best for her and her loved ones, even though she was a cop. Not that I am going to suggest that everyone needs to out there and break the law. But people need to stop doing what everyone thinks they should do and start doing what makes them happy.

I enjoyed the twist that popped up in the middle of the drama with Berg and Jay.

With each page I passed by I really wanted to see what was going to happen with the story line and the main characters.

I think this is a solid 4 star book. The only reason this isn't a 5 star is because I felt like some of the dialog and writing was a bit repetitive. But that didn't take me away totally from enjoying the story.

Vanessa Skye has always had a love of words and spent her school years writing poetry, speeches, and fictional essays. After completing a Bachelor of Arts in print journalism and studying psychology at Charles Sturt University, Vanessa got a job at Australia's largest publisher of regional and agricultural news and information, Rural Press, where she worked as a journalist in the central west of New South Wales for four years. Thousands of stories later, Vanessa decided to move back to Sydney and try her hand at public relations while studying for a master’s degree in communication. Skip forward a few years and Vanessa was once again joyfully studying various psychology subjects while managing a Sydney public relations firm. Enthralled with examining the motivations behind people’s actions, Vanessa realized what she really wanted to do in life was combine her love of words with her fascination for human behavior. So Vanessa quit public relations to begin the significantly more impoverished life of a professional writer. Inspired by a recurring dream, Vanessa wrote her crime fiction debut, The Enemy Inside, which challenges the concept of justice, asks if the need for vengeance sometimes justifies murder, and explores whether you can ever heal from childhood abuse. Broken is her second book in this series. In her spare time, Vanessa wrote a short story, The Piece, which was published in February 2012, by Dark Prints Press as a part of the 'One That Got Away' dark fiction anthology. Vanessa now works as a freelance writer, lives in Sydney’s northern beaches, and tries to immerse herself in salt water at least once a day.

Be sure to look for Book One-The Enemy Inside and Book Two-Broken well! 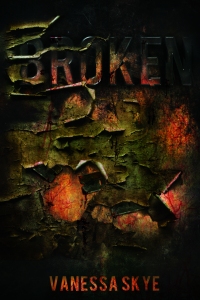 
Praise for Bloodlines
"So good! As with the previous two books in this series, I absolutely loved it. The pacing was great, there was nice dry humour to lighten the very dark tone, and all the characters completed a satisfying arc from books one and two. Berg in particular is fantastic – I loved that she didn’t completely go back to her old ways when she was at her lowest, and the ending leaves us with hope for her future. " - Andrea
Goodreads Review