Pump Up Your Books Presents: (Memoir) I Just Wanted Love: Recovery of a CoDependent Sex and Love Addict by D.J. Burr 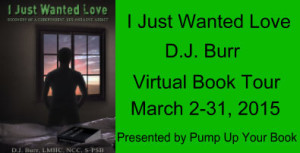 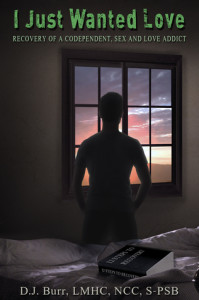 D.J. Burr is a man on a mission; successful business owner, highly respected psychotherapist and survivor of a dysfunctional life. At a young age, all he wanted was to be loved, but instead found himself targeted by a sexual predator. D.J. slipped into a life of addiction and clawed his way through broken relationships and seedy sex clubs–looking for love in all the wrong places. D.J. will take readers on a roller coaster of emotions as he details his search for grace and love.
Guest Post
I Just Wanted Love by D.J. Burr
Every human being comes into the world wanting to be loved. Without love, we are left with heartache, pain, grief, regret, shame and guilt. This is not how I wanted to live my life.
At 26, I set out on a journey to help others as a licensed psychotherapist. I set up shop in Seattle and attempted to do the best work I could possibly do. I wanted to help heal others of heartache, pain, grief, regret, shame and guilt. It was a challenge that I wanted to overcome. “How will I do this?” I often pondered. I hadn’t yet healed my own wounds.
Trying to be present for other people’s issues was the most challenging effort of my life. I was not only a therapist but a teacher. My clients looked to me for education, guidance, and reassurance that life wouldn’t always be so cruel. I couldn’t offer much reassurance, but I could offer one thing: I would be present as long as they showed up and did the work. And they did…
As my clients were showing up and my practice was starting to take off, I felt this nagging sensation buried deep inside. Something was missing. I still didn’t feel like I was loved. This was a deeply rooted feeling that I couldn’t shake. As I tried to fight it so I could stay present for my clients, I sunk into an abyss of shame.
The shame told me “I am not good enough”, “I don’t deserve to be loved”, “and I will be a failure in this business”. How was I supposed to manage now?!
For the last three years, I have been trying to figure it all out. I hit bottom and realized that I didn’t love myself. That was what I was missing. I had no earthly idea how to genuinely love myself. With the guidance of a therapist, I ventured into a space of self-discovery.
I came to understand that several of my negative thoughts and behaviors were caught up in an addictive cycle. I am codependent person and a sex and love addict. First, I placed my value dependent on what other people thought about me. I was raised in a less than nurturing and sometimes abusive household. I grew up believing that I was “worthless”, “only good for taking care of others”, and “never going to be loved”.
Secondly, I spent most of my life caught up in other people, places, and things that were distracting me from my goals of finding love and happiness. The shame that was deep-seated kept me believing that I would never, ever be loved, by anyone.
Lastly, sex became my most important need, because I learned that if I had sex I would be appreciated and accepted. These false beliefs almost cost me my life.
It was all bullshit. I had to learn that I am worthy of love. I found out I was lovable, loving, and loved by trusting in the power of 12-Step meetings. I found a community that accepted me for all my traits, including my flaws. I found a sponsor that guides me on a journey of self-discovery that is natural, loving, and healing.
Through my own work, I have been able to truly be present at my practice. I now help others find out who they are and determine who they want to be. No fairy tales here; just real life work by real people wanting to be loved.
I chronicled my life and journey to healing in my latest book, I Just Wanted Love: Recovery of a Codependent, Sex and Love Addict, available on Amazon and BarnesandNoble.com.
Thank you for being here.
You can follow me at ijustwantedlove.blogspot.com, @DJBURR1022 on Twitter and Facebook.com/djburrseattle

I AM ONLY AS SICK AS MY SECRETS

Like a ray of light, you shined into my life.
You took my hand and held it tight.
I looked at you, very sweet, indeed.
You touched my soul and, like a thief in the night, you stole my heart.
I wasn’t willing to, give at first, but with your honesty and trust, I must.
Forever in a day, every second of every hour, every day of every month, I will always
Know you have a piece of my heart.
You cherish me, as I do you.
I may not be yours in the fullest extent, but in our hearts we’ll always be.
I love you with every inch of my heart, but remember only one piece is given when
We part.

I became even more isolated from my family that summer. Kenny had come into my life and became everything I thought I was missing. Every chance I could take to see him, I did. He told me he needed me. He told me he loved me. I was convinced that I was in love too. It wasn’t clear at the time, but I now know that my child molester had the ultimate grip on my reality.
It was as if I were under a spell. Never had I disobeyed my family like this and lied to so many people. I was different now; I was not myself. I became obsessed with Kenny. But, he knew I was only staying with Mama Sara for the summer, so he slowly tried to push me away. He finally succeeded when he asked me if I thought he would ever leave his family for me. I said I hoped that he would. He said there was no way he would.
And so, there it was. In a single instant, Kenny went from this caring, loving friend and lover to this evil user. But, I still couldn’t hate him. Before I left, he said he would always love me and cherish everything I had ever given to him. All of these moments ignited my addictions, but the stage was set much earlier in my childhood. 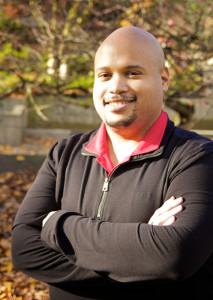 Darrett “D.J.” Burr is a licensed mental health counselor in the Washington State; national certified counselor and a specialist in problematic sexual behavior. He has been in private practice in Seattle, WA for five years. D.J. is the co-founder, owner, and Executive Director of A.B.L.E. Counseling Services, LLC.
D.J. is the creator of ABLE Affirmations, ABLE Life Recovery, and the ABLE Care Clinic. D.J. published Unfinished: A GLBT Domestic Violence Workbook while completing his Masters in Community Counseling at Argosy University-Atlanta in 2009.
Born in raised in Marietta, GA, D.J. has been known to many as a survivor. His childhood was less-than-nurturing. D.J. spent the majority of his early years tending to other’s needs and wants; not knowing what his were. He kept fighting for more–more understanding of himself.
Unfortunately, D.J. lost focus after being targeted by a sexual predator. D.J. lapsed into addiction to numb the pain of the molestation, broken relationships, dysfunctional family of origin, and loss of his childhood. However, the addiction did not stop him.
Over 15 years later, D.J. has learned to live life instead of surviving life. D.J. found answers to his long unanswered questions, primarily, who loves me? Twelve Step recovery and rigorous honesty saved D.J. from a life of addiction. He can now say, “I love myself.” Loving himself allowed D.J. to stop chasing unavailable people, places, and things. He now focuses on his recovery, which impacts every facet of his life.
D.J. enjoys writing, watching movies, especially horror/suspense. His favorite band is Nickelback. His favorite R&B group is Destiny’s Child. D.J. is also a huge fan of old 80s-90s cartoons like Transformers.

Email ThisBlogThis!Share to TwitterShare to FacebookShare to Pinterest
Labels: Pump Up Your Book, Spotlight