An assassin is at work—one of the best in the trade. His body turned to dust long ago, but his spirit roams the Earth freely, undetectable to the five senses. He stalks his victims waiting for just the right opportunity. Then, in quick succession, he possesses a human host and strikes down his quarry. For a century and a half he has served this way.
Deputy Sheriff Nate Barrington is riding the crest of a new relationship. Kaitlyn Spencer is beautiful, altruistic, enlightened—everything he's not. She teaches classes in New Age philosophy at her growing school. Nate doesn't share her spirituality, but the physical passion hasn't subsided enough for him to care.
Nate's nirvana quickly unravels when Kaitlyn's life is threatened on two separate occasions. With no apparent motive or any evidence suggesting collusion, the police are stumped. Even more troubling to Nate, Kaitlyn is eventually convinced she is the target of unseen forces.
A hardheaded pragmatist, Nate isn't prone to believe that spirits can possess people. As far as he's concerned, Kaitlyn's claims of perpetrators possessed by a spirit assassin are on par with comic book stories and have nothing to do with reality, and her esoteric, New Age mumbo jumbo begins to drive a wedge into their relationship. And why Kaitlyn? What secret is she hiding?
Even with the sheriff's resources at Nate's disposal, the odds for Kaitlyn's survival are not in her favor. The true enemy is virtually invisible, and Nate's conventional police tactics have no effect on the spirit world. Behind it all is a deal the assassin had made with the devil: send Kaitlyn Spencer to an early grave in exchange for a fresh start. For that, the assassin will stop at nothing to uphold his end of an Unholy Bargain. 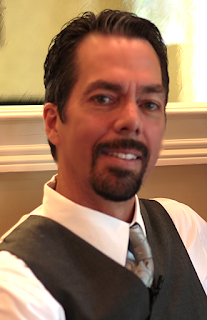 Travis Hallden Holt is a former U.S. Navy surface warfare officer and veteran of the Persian Gulf War. He's worked the past twenty-two years in the corrections side of law enforcement, first in the prison system, then in the streets as a probation officer. He spent three years supervising felons in a south Atlanta neighborhood ranked the ninth most dangerous neighborhood in America, where one in every twelve residents becomes a victim of crime each year.
For years, his interests were in weaponry (both small arms and large scale), warfare tactics, hand-to-hand combat, criminal justice and unsolved crimes. But life has a way of molding perspectives, and Travis came to realize the physical world known to the five senses didn't have all the answers. It scratched the surface at best. Accordingly, Travis's interests shifted to supernatural phenomenon, spirituality, the mysteries of life, the invisible world beyond our five senses and the forces that lie therein. He's still a peace officer, but one who has mingled with psychics, mystics, mediums, energy healers, shamans, gurus, artists and denizens of the "underground."
Travis is the author of Unholy Bargain, a supernatural thriller published by Double Dragon Publishing. He resides in Atlanta, GA.