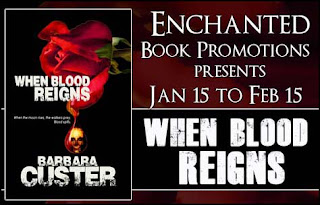 About the Book
Title: When Blood Reigns
Author: Barbara Custer
Genre: Horror / Science Fiction
Marked for death, Alexis accompanies her lover, Yeron, and four survivors of a zombie invasion on a search for the renegades who created a chemical that induces a zombie-like state. On the way, ravenous flesh-eaters attack Alexis’s team; one survivor turns on her. She realizes too late that the renegades have been tracking her every move. When officials capture her, she becomes deathly ill. Can DNA splicing save her? Will Yeron’s attempts at rescue jeopardize all their lives? 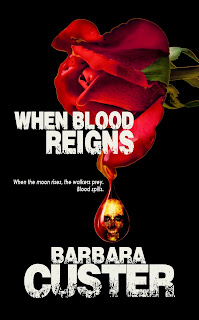 Author Bio
Barbara lives near Philadelphia, Pennsylvania, where she works full time as a respiratory therapist. When she’s not working with her patients, she’s enjoying a fright flick or working on horror and science fiction tales. She’s published Night to Dawn magazine since 2004.
Other books by Barbara include Twilight Healer, City of Brotherly Death, Infinite Sight, and Steel Rose; also novellasClose Liaisons and Life Raft: Earth. She enjoys bringing her medical background to the printed page, and then blending it with supernatural horror. She maintains a presence on Facebook, Linkedin, Twitter, and The Writers Coffeehouse forum. Look for the photos with the Mylar balloons, and you’ll find her. 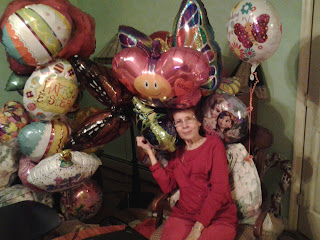 Book Excerpts
Excerpt One:
Under a sky dark as tar, Shively and his gang left through the rear exit of Jackson Hospital. The power blackout cloaked the surrounding streets in shadow. Shively and Tyrone led them through an alley parallel to Jonasville Street, where the hospital was. Alexis stayed close to Yeron, teeth gritted, with Johnny to her left, and behind Shively. Mark followed close behind her. Despite Johnny’s and the others’ assurances that they could control Mark, she found herself shivering. She felt his intent stare on her, the way she had ten years ago right before he threw her on the couch.
“Brrrrrrr.” She rubbed her arms, moving closer to Yeron.
The warm May air carried a stench like that of rotting tomatoes. At the end of the block, the full moon splashed silver over the buildings and bushes. Yesterday they had slaughtered an army of emaciated, wasted people who smelled like they were many days dead, monsters that had trashed Jackson Hospital’s research floor. They knew more lay in wait; the offensive odor betrayed their secrecy.
Unease festered in Alexis’s stomach. A creepy feeling nagged at her, like someone had eyes on her, biding his time, planning a surprise attack.
She glanced toward Yeron. The soldier in him had replaced the lover: squared shoulders, head erect, jaw muscles tight, and mouth closed. His ruby eyes shifted right and left. With the invisible eyes on her came an overwhelming sadness. Don’t be ridiculous, shescolded herself. It’s not like he’s snubbing you at some party. He’s watching out for trouble and you should, too, so pay attention.
Still, the feeling of being watched lingered.
Aw oooooooooo! AWOOOOOOOOOOOOO!
Alexis let out a yelp, and this time, she did latch onto Yeron’s elbow as if they were dancing at a party. The howling continued, loud and plaintive.
“Listen to that.” She nudged his shoulder. “Those woods are crawling with dead and their stink’s drawing the dogs.”
“The dogs smell Kryszka renegades.” Johnny’s voice faltered. His wide blue eyes remained fixed on their surroundings. “I don’t like this.”
“Whether you like it or not, deal,” Shively told them.
“That’s right.” Mark’s voice raked her with freezing contempt. “We’ve had enough of your whining.”
Alexis stiffened, then set her lips in a grim line. Damn, I’m not spending the next several weeks listening to Mark’s shit.
With her telekinesis at the ready, she whirled upon Mark and unleashed a surge of psychic energy. Mark stumbled, fell against a brick wall, and then landed in a heap. He doubled over, one hand rubbing his right arm.
“Cut the shit, asshole,” she warned him.
“Whoa!” Johnny brayed nervous laughter. “She socked it to you.”
“Bitch nearly broke my arm.” Mark scowled, struggling to his feet.
“Next time, she might hurt you bad.” Tyrone’s solemn face shone with sweat. “If I were you, I’d shut it.”
Mark’s mouth worked like a guppy’s, and in the moonlight, his face reddened. Tyrone held his finger to his lips. Mark kept quiet.
The howling continued, sending liquid fear racing through Alexis’s veins.
“Of course, the dogs will howl,” Yeron said. “This street smells gamey.”
“The animals sense danger, too.” Alexis hugged her tunic around her shoulders. She had Yeron to thank for looting the plasma guns and uniform after his compound exploded. “Weekly World Reporter had a big article on dogs and how they smell scent.”
Yeron did not comment. He continued staring ahead, his face impassive.
“I’d like to give those creatures a nice, long, dirt nap.” Johnny scowled. “Too bad Weekly World didn’t give us an easy way to make it happen.”
“Do not worry, honey.” Yeron smiled and stroked her hair. “I will not let you face those creatures alone.”
“Be quiet, all of you!” Shively darted a withering glance over his shoulder. “There’s something weird ahead.”
Shively reached into his backpack for his binoculars and flashlight. Alexis and the others stopped and kept quiet. All eyes were on Shively. There was no sound coming from the houses; most of them were cloaked in shadow. No streetlights, thanks to the power outage. The dogs continued howling, long, melancholy wails. No other sounds could be heard except for the crickets. The air thickened with its rancid odor. Alexis slid her fingers around her plasma gun. Knees bent, she braced herself for an exchange of gunfire.
“Where at?” she asked.
“The back alley.” Shively pointed and moved to his left.
Alexis and the others hustled after him. An acrid smell wafted from a garage near a doctor’s office. The buzzing came next. The garage appeared intact, but the low beam from Shively’s flashlight washed over a corpse. Swarms of flies buzzed around its skeletal legs and the two blood-spattered bushes that concealed the rest of the body.