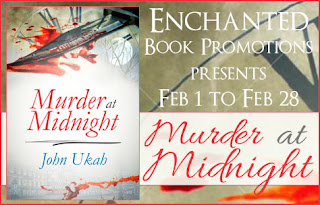 Title: Murder at Midnight
Author: John Ukah
Genre: Cozy Mystery
Alex Simpson, an ex-police officer, decides after a bout of typhoid fever to take a break in a serene and therapeutic environment. The last thing he expects is to be called upon to solve a murder at the Kinging Guest Lodge. But that is what happens, when the delectable and vivacious Maria Marshall is found dead in her bedroom at midnight.
The gallery of characters living at the guesthouse and thrown into the mix, do not make his task of solving this chilling and brutal murder any easier …

I really liked what the author tried to do and the concept ... but I just couldn't get into the book. It was really hard for me to finish it and it just wasn't my cup of tea. I read a lot of different kinds of styles of writing and themes and I thought this would be something I could enjoy. Maybe you will like it more than I did. The quality of writing wasn't the issue the author did well on that. The story just didn't capture me. I wish it had.

3 Stars on this review.