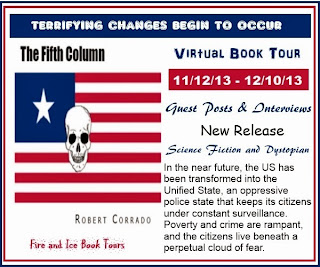 
In the near future, the United States has been transformed into the Unified State, an oppressive police state that keeps its citizens under constant surveillance. Poverty and crime are rampant, and the citizens live beneath a perpetual cloud of fear. Pedro Pulido has never known his country to be any other way, but his grandfather remembers a time before, and he teaches Pedro to recognize the propaganda for what it is and to think for himself. Still, Pedro is no revolutionary.

Then Pedro’s quiet town is engulfed by the country’s growing anti-government insurgency, and terrifying changes begin to occur. A mechanical soldier with artificial intelligence, Samuel, is deployed in the neighborhood and, like others of its kind, is glorified by the government as a great protector of the people.

However, it quickly becomes apparent that Samuel isn’t just keeping an eye out for insurgents. After the death of one of Pedro’s closest friends at Samuel’s hands, Pedro finds himself faced with a decision. Does he accept the status-quo or seek justice for his friend’s murder?


Samuel sat motionless at the end of the cul-de-sac in the pouring rain. Or, seemingly motionless to the residents of Sanctuary Court, anyway. Currently, it had 12 uni-directional robotic ears trained with mathematical precision on strategic points within the neighborhood. Three other microphones were set to record all nearby ambient noise through a variety of filters for the sounds of electrical and mechanical tools, the spoken word, and even whispering. They could record the drop of a pin with crystal clarity from over 100 meters away. Samuel’s numerous optical lenses were trained similarly. In wide-angle they could snap to movement and then zoom in and follow. In tight-angle they could record in high-definition a portion of a citizen’s tattoo or birthmark and, even if it was half concealed, compare it against millions of others in the FBI, CIA, NSA, Homeland Security, and Civil Defense Intelligence databases. For all of its concealed functionality, it looked like its power switch had been shut off. Samuel observed the residents of the street peering out through their half-closed curtains and blinds or through front doorways held slightly ajar. The heavy rain pattered against its frame, and in the gray overcast day, it looked like something discarded.

Robert Corrado grew up in a small town in the California foothills reading comic books and science fiction novels, muddling through pen and paper role-playing games, and filming amateur action shorts on his neighbor’s VHS camcorder. He currently resides in Denver Colorado.  He’s always been a big dreamer, starting his own business at the age of 21, and pursuing creative projects throughout his life in a variety of mediums.  He enjoys reading novels, watching films, skiing, dancing and karaoke with his wife Karen, and spending time with his Jack Russell Terrier, Joey. He has been writing creatively since grade school and shows no signs of stopping.  Some of his favorite books are 1984, Jennifer Government, and just about anything by Phillip K. Dick.  If he were standing in front of you or writing an about page for you he’d definitely thank you for taking the time to read something he wrote so…

Giveaway:
Author Robert Corrado is giving away some great prizes! One lucky winner will receive a free copy of The Fifth Column, plus a $50 Amazon gift card. Four other winners will receive a copy of the book! Enter through Rafflecopter. Winners will be randomly selected by the author at the end of the tour.