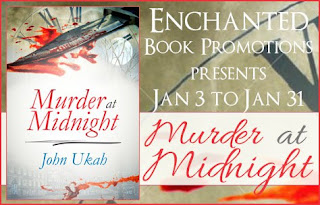 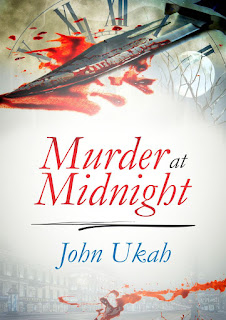 Title: Murder at Midnight
Author: John Ukah
Genre: Cozy Mystery
Alex Simpson, an ex-police officer, decides after a bout of typhoid fever to take a break in a serene and therapeutic environment. The last thing he expects is to be called upon to solve a murder at the Kinging Guest Lodge. But that is what happens, when the delectable and vivacious Maria Marshall is found dead in her bedroom at midnight.

The gallery of characters living at the guesthouse and thrown into the mix, do not make his task of solving this chilling and brutal murder any easier … 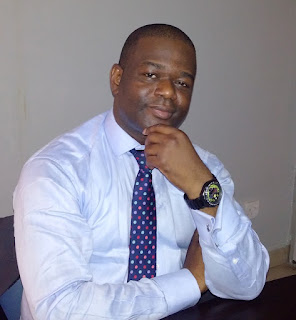 It is also available on Smashwords, Kobo, Apple, Barnes & Noble (Nook), Okadabooks, and major online stores.
Okadabooks is mainly for buyers in Africa.

“Have you set the rat poison?” I asked Ayuba, when he was filling my glass with water. And as if on cue, the Power Holding Company of Nigeria struck. We were all enveloped in darkness.
“Do sit still, everyone,” Ayuba cautioned. “I will get the generator working now.”

I heard him open the main door and go out. Someone was still walking around the dining area, in the dark. There was the harsh scraping sound of a chair moving across the terrazzo floor surface and the person sat down finally.

Ayuba and the generator had a good understanding. They had known each other for years. It purred and came to life. Soon enough, it was roaring like a wounded lion and the lights came back on. I looked around at everyone, they were all at their tables as calm as you please. I wondered which one of them had been moving about in the dark and why.

“I was asking you about the rat poison, Ayuba,” I said when he came back.
“It's there on …” began Ayuba pointing to a shelf. But now his mouth was agape in surprise and he couldn’t seem to continue. His hand hung in space, still pointing at the shelf, as if held by a spell.
“What is it?” I asked him.
“The bottle of rat poison was on that shelf just before the lights went out, but it is no longer there now,” he explained, standing up to see better.
“Maybe someone accidentally knocked it over, when it was dark,” I suggested. We left the dining area and searched around the shelf and the bar area, but it was a waste of time.
“You’re sure it was here?” I asked.
“Yes, I saw it just before the lights went out.”
That was when Wahimda screamed.
“Ah! My tummy!” she shrieked, clutching at her stomach.
“What is it?” I asked going over to her. She was already on the floor.
She kept screaming, “My tummy! My tummy!”
Tonye almost jumped out of his skin. His eyes grew as wide as saucers. I was also startled by the piercing scream.
“Is she in labour?” Tonye asked no one in particular. His head seemed larger than usual.
“Maybe she had an abortion?” he suggested.

“Oh,  shut up, Tonye!” I snapped. Then, I went on my knees and tried to calm Wahimda. What was the matter with her?
“The hot chocolate! The hot chocolate!” said Wahimda. “Ah! The hot chocolate!” There were beads of perspiration and signs of agony on her face.
“The hot chocolate?” repeated Amina incredulously. “How do you mean?”
But Wahimda groaned louder.
“She had better answer right now,” said Tonye, impatiently.
“Wahimda,” I called, holding up her head and wiping off some of the perspiration with my handkerchief. “What is the matter?”
“The hot chocolate. It tasted funny like insecticide,” she said weakly, her eyes became glazed and she seemed to have difficulty keeping them open. “It tasted funny …” her voice trailed off as if she hadn’t the strength to continue.
“Oh, I see now,” said Tonye nodding his head sagely, as if everything was now crystal clear. He grinned at everyone with a moronic smile on his face. He reminded me of a cow having a good time in a grass field.
“But was it not normal chocolate?” asked Willie.
“It was,” Amina answered, looking bewildered.
“The rat poison!” said Ayuba in a sudden fit of inspiration.
“What happened to rat cousin?” asked Tonye with a blank expression on his face.
“The rat poison must have somehow found its way into the chocolate,’ explained a distraught Ayuba.
“It is not possible!” said Amina, with an emphatic shake of her head. “The bottle was never near where I made the hot chocolate. It was on that shelf until the lights went off.”
“Let’s get this young lady to the hospital,” said John.

We called for help from the policemen. They assisted in getting Wahimda into one of their police vans.
“Please, hurry!” Amina called out, as they went to the nearest hospital.

I wondered what had happened. Had Amina accidentally or deliberately put rat poison in Wahimda’s hot chocolate? But why would she want to hurt her husband’s cousin? Had someone else done so under the cover of darkness? Who moved when the lights went off? Had the young lady deliberately poisoned herself? But she was not the suicidal type! Or was she?

The other guests huddled and were asking themselves questions along similar lines. But where was the bottle of rat poison now? Empty or not, where was it?

I called out to Tonye, “Help me look around for the bottle of rat poison. Don’t touch it if you see it. Just show it to me.”

We began searching for it. Unfortunately, Tonye was hell-bent on following me around and searching in the very places where I put my hands to search. At a point, we were both under the same table. I had no idea he would try to get under the same table, as I was. We ended up knocking our heads together. Stars exploded before my eyes, as soon as my head struck his rocky head. I was pissed, to say the least. The others asked what we were looking for, when they saw me rubbing my head in pain. I stared at Tonye with deadly intent; he had the nerve to watch me in surprise, as if wondering what the matter was with me! I told them what we were looking for, then tried to get up, forgetting that I was still under the table. This time, when my head struck the table, I saw stars, comets and asteroids colliding and exploding.

“Murder At Midnight” is available in all Amazon markets on Kindle. It is also available as an EPUB and iBook on Smashwords, Overdrive.com, Okadabooks, Apple, Kobo and all major online stores.