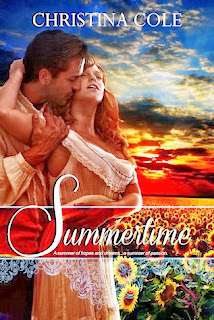 Purchase: Amazon Smashwords Barnes & Noble
Source: The author gave me this copy for an honest review

Blurb:
Linn Sparks wanted all life had to offer. Fame, fortune, glamour and excitement. She found it as a star of the stage at the Crown Theater in San Francisco.

For Ed Ferguson, life was far less complicated. All he wanted was Linnie Mae, but she’d left him standing alone at the altar seven years before when she’d run off to pursue her dreams.
Now, Linn Sparks has come home to Brookfield, Kansas.

But coming back means facing a lot of unpleasant realities: a strained relationship with a father who never wanted her, a mother whose grasp on sanity is slipping away, and the feelings she still has for the love she left behind.

Ed still wants Linnie Mae, but he knows she won’t stay. How can he spend the summer being near her and not get his heart broken again?

Between them, passions flare in the heat of SUMMERTIME.

This book was great. I'm trying to figure out where to start on this review. The first thing that I just loved about this book is that the town took place in Kansas. Not Wichita or another major city but a small town, outside of Wichita. Personally I can't get enough out of mid-west novels. Being from Kansas and all it makes me feel nice and nostalgic  to read them.

Linn was an easy character to like. She had a bit of stubbornness that started to wear down as Ed pushed her. It was really enjoying watching their relationship rekindle. I enjoyed Ed a lot. He was the type of guy you picture when you think of an old style man.

Linn and her father's relationship broke my heart, it brought tears to my eyes and I think that any daughter who is a daddies girl will be able to identify with them. And even if you're not.

Ed and his bother had an odd relationship. Couple times things were said and it made me take pause and go, "What the hell is wrong with the brother." But in the end it all made sense.

I loved Tad, Ed's son. He was adorable.

This book in my eyes gets five stars because when you read it, you're left smiling and feeling light hearted in the end. It was a breeze to read, I was told it was just over 90,000 words but I flew through it in under five hours. I can say, in the 34 books I have read this year, I can only think of three that I read that quickly.

Thank you Christina for asking me to review this book - it was a major delight!