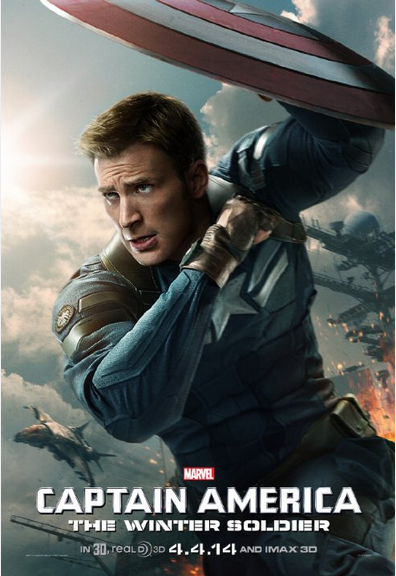 Steve Rogers struggles to embrace his role in the modern world and battles a new threat from old history: the Soviet agent known as the Winter Soldier.

Wow does Marvel know how to put out movies!

As always, when it comes to these 'comic book' movies, I know very little about the 'source' material. All I knew going into this was *** SPOILER *** Bucky was coming back and he was the enemy. I really should think about reading these comics I guess. If they came in novel form, I'd do better with that.

Evans was great. And for deff more than his nice muscles that made staring at him just simply pleasurable. Johansson did an excellent job in her role and I just loved the addition to Anthony Mackie.

One of the first scenes in the movie Evans is fighting Georges St. Pierre also known as Batroc the Leaper. All I gotta say is WOW. That scene was just phenomenal. My husband and I were discussing it and the thing I think I loved the most was the moves looked real, didn't look like stunts and most certainly felt believable.

I was just in awe.

Everything about this movie was fantastic. I felt very connected to all of the characters and the two and a half hours flew by.

Stan Lee was hilarious in it, his cameo's always make me smile.

I love how Marvel's action is always captivating. From the explosions to the drama of the story line and plot.

If you love Iron Man, The Avengers and the first Captain America - then this is a MUST SEE for you.

Five Stars for never letting me down!