The Way I fell In Love With You….

You lie on the couch and read with me
You laugh with me in the car
You hold me during the scary parts
You pour cold water on me in the worst spots!
You sing me songs
You draw me pictures
You bring me love like no others

There is a smile on my face, a big one, one that cannot be removed if anyone tried. And it is all because of you…
No comments:

Set Me Free - Chapter One 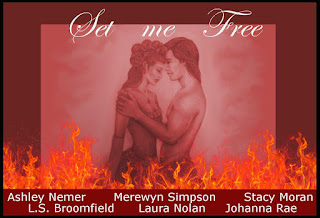 Six authors are coming together to write a free flowing love story - come view our blog every week to find out what happens to our two main characters. We will alternate each Monday and Friday with our posts.

"I saw him coming down this way, he can't be far." The voices were traveling the streets bouncing off the buildings and echoing through his head.

"He is dead, he thinks he can escape his duty, but he can't. He breeds or he dies!" That was his father...He'd recognize that voice till the day he died.

"Are you sure it was him? Maybe it was just a human male who favored his looks." Another one said.

It didn't matter how fast he ran, he would never escape the voices, he would never escape the duty they thought he was meant to uphold. Making criss cross motions with his running patterns he ducked into the alley way along side one of the churches off of the main road in the middle of Rome.  Taking cover from the men who were looking for him he stayed hidden until they passed his hiding spot.

He looked down at his hands, obvious to anyone who looked at him to not be of human origin, nails too pointed and dark to be human, skin too firm and thick. His pupils misshaped and discolored. The rain had started to sprinkle in Rome and had  matted his hair to his face. His vision started to blur and he was thankful that the sound of his clan members had dwindled.

Renzo's life had been a battle of wits and some days it seemed like his luck was running out. At least today wasn't one of them.  Not everyone in Rome was so quick to judge a person because of their species. Occasionally you could find a man or woman willing to look past the obvious differences that made the minorities stand out.  He however had two disadvantages, there were two types of people on the hunt for him, humans and demons.

Renzo's been on the run for five years, his family had demanded that he take a mate with the female they chose from a neighboring clan and he wasn't ready yet. He was only  twenty-four, still young in so many ways. Age didn't make a man, wisdom and maturity did. When he refused he became a refuge of demon law. To deny ones parents was to shun tradition and that was not condoned.

Demons took many forms and were often misunderstood. Not every demon was of the same breed, there were the ones that fought with God and the angels here on Earth then others who were like him, bound to this plane to wander and live out his life. Sometimes, when his breed were able to fulfill their rightful powers they were able to transcend their mediocre upbringings become greater than their ancestors. But that rarely happened. Renzo didn't know that he came from a long line of transenders.  Every generation had one.

"Looking for shelter again Renzo?" The priest always had a cool tone that brought calmness to anyone around him. It was one of his gifts. He didn’t realize he was blessed but this human had something special about him.

Renzo nodded towards him and simply walked inside the opened door of St. John Lateran's Archbasilica Church.

Father Giovanni never made him speak when he didn't want to, but he always knew what to say even when it wasn't asked. "Did they recognize you again? You cannot hide forever my son, one day you are going to have to face your fears. Your parents will come for you."

Renzo's body spun around and his eyes flashed red for a brief moment while he attempted to bring his anger under control, "They better hope I never see them again or they will realize the true power they lost when casting me aside!"

"Anger serves you no purpose Renzo. We have been through this, you must forgive and let it go, it's what He would want."

"Since when do I care what HE wants? He left me here, LIKE THIS?" Renzo stormed down the aisles, "If he cared then he wouldn’t have made the rules for my people the way they are and I wouldn’t have been condemned to die because I wanted to live a little before being married off just to mate and make babies."

"He has a reason for everything that happens. You need to have faith in yourself and in him."

"Old man, I have faith in very little, the only thing I know is that if I go out there tonight I'll be forced to kill, and I don't want to have to slaughter my own, not tonight. I don't want to cross that line. Not yet."

"As long as you fight your urges Renzo, you are better than your parents. You can be more than what you think you were made for." Father Giovanni walked up to him and placed his hand on the back of Renzo between his shoulder blades and rubbed them in small circles, "Can we try praying again, asking for guidance?"

"Father, your ways are not mine, I keep telling you this. I'm a demon, when will you accept this? I cannot be saved."

"I've cast demons out, you are not a demon, you hold none of those traits, not the demons that you are talking about. You are just a lost soul Renzo. But I will let it go, again, for tonight. I have your bed as usual in the back, come, let me get food and blankets for you."

Renzo hated putting him in danger but he had no choice. This was his only place of solitude and solace when his family was in the city. They would be gone in a few days and he would be able to leave, letting his friend carry on his way. Maybe he would head into the Vatican's vault on his next journey outside of the boundaries of Rome, look through the archives. There had to be a way to release him from his duties.

"Thank you for the shelter." Renzo placed the blanket on the cot and the plate of food on top of the chair, he looked up at his friend and gave a bow of his head just a few inches, enough to shield his eyes from the father's sight.

"My son, this isn't your fault." Father Giovanni placed his hand on Renzo's shoulder and gave it a squeeze before walking out of the room and sealing him in the dark silence for the night.

Isolation - his only true comfort.