When Life Throws A Curve Ball ... 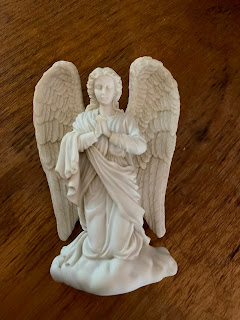 It's been almost a year, since I felt the desire to write on my blog. A friend told me today maybe if I took 30 minutes out of each day to find something to do in the writing realm, that maybe I will find my creative spark again. This year has just wiped me out completely. They say that things happen for a reason, well, maybe I can see why the first part of the year played out the way it did.

They never said life as a wife or mom would be easy or even fulfilling every day, but this year is truly testing my resilience and strength in these areas. Not sure even how to put thoughts to paper about the emotions or struggles this year has brought forth in our lives. I just know that this year the feeling of isolation and voids have been prominent in certain points that don't usually cross my path. I hadn't realized how lost my mind had actually become until this past weekend when I was at an author event in San Antonio. I was surrounded by author friends I hadn't been able to see in two years because of COVID. Readers I hadn't seen even longer. It was just a wonderful day that filled my cup to the rim with enjoyment.

That is something that this latter half of 2021 has truly been without in a lot of ways.

At the start of the year I ventured out into the political arena in my small city. I had the most eventful and fun four months. I made literally 100s of new friends, I went to so many different peoples homes and got to know them. I was welcomed by many. Even though in the end I fell short it was one of the most rewarding and grandest adventures I've taken in my 38 years. I haven't ruled out doing it again. I learned a lot, I also think I made a difference. I thought even though I was in an uphill battle, this was going to be my year.

Then May 1st happened. This is the first time I've written since my Aunt Pam died. It's weighed on me so much over the summer. So many times I wanted to break out the blog and just put my feelings and thoughts out there. Many times I wanted to pick up my WIP and just try to give my characters life again. But Aunt Pam was gone. She won't read it. She won't be there to cheer me on when I feel my confidence lacking. It just isn't the same.

At 9:30 that morning when I found out she had died, I knew writing would be a huge challenge. When that person who inspires and pushes you isn't there, picking up the pieces becomes harder. You can't pick who your muse is, or who your mind associates with certain aspects. And writing was always her. She believed in me to a point that I just couldn't ever feel from anyone else. How do I pick up and move on from here? I just feel very lost on that part of it.

But, shortly after, my Grandma, her sister, died. Just 20 days later. My heart hurt in ways unimaginable. I was one of those extremely blessed kids who grew up with not one, but all four of my grandparents throughout my whole childhood. Through my religious upbringing, my Taekwondo journeys, my Debate tournament preparations, college, wedding, writing, everything. 2012 hit and first went Grandpa Pete. I didn't think I could ever get over the immense loss I felt kissing him goodbye for the last time. I had my writing to help me with that grief. But when I lost his wife during Hurricane Harvey and then just a couple years later my other grandma, it is as if the loss complies on one another. Each one worse than the last. Now, I'm down to Joe. He was one of the strongest men to me growing up. But I know at 90 he isn't going to live forever. 2021 took so much from me this year I am extremely scared for these last 3 months.

In the past I've written about our adoption story and being a special needs mom. This summer posed a new kink in our system, my husband. I never thought I would have to prepare myself so young to see my husband suffer. We've not spoken about this publicly. We've kept it to ourself for the most part. In June, he had a significant neurological event that rendered him unable to work. We've been rebuilding throughout the summer. Finding the 'new normal' in our family dynamic. Some weeks easier than others, some weeks just hell. Pure hell.

That's when the isolation feeling really kicked in. You look around when you're knee deep in hell and you see just exactly who is there for you, who actually has your back. It isn't always the people that you think it is. Individuals I've known many many years even at a point family, leaving you alone. That suddenly you become dependent in a way on the kindness of strangers.

Maybe I lost the election because God knew I couldn't do both, help run a city and balance this new normal in our lives right away. Or maybe I hadn't learned enough life experiences yet. But I know what I've learned after all of this.

Bonds only work when they are two way, each working together. Luckily Tony and I have each other, and our bond has only gotten stronger.

Those people I mentioned at the start of this blog, those individuals who opened their home to me and believed in me. The kindness of strangers really showed through these clouds. We have had several families open their hearts and help us, even when we say no. In some small ways I didn't even realize how much it meant to us, to me. Balancing this life on my shoulders has taken me to my knees many times in the last 4 months. We have no real clear picture on what the future is going to be like in our house but I wish I wasn't feeling alone.

If you know me you know my schedule is jammed I am always out doing something, I'm always bustling around town either in Scouts, city committees, work, and a lot of doctors appointments. So being alone isn't something I often associate with myself. But alone is how I feel.

Maybe it is due to the fact we haven't been very public about how this has happened to us. Or maybe it is because it happened to him, and not me. He's much more reserved, less vocal.

The worst part, the city I fought so hard to help be a part of, the city that employed him for 13 years and 9 months, let him go 2 days after his FMLA expired. The city that we moved to because we wanted our children to be in a safe and loving place. Now I am battling this duality. Loving a city that has given back to us in so many many many ways, and hating it for what it's taken away from us, security. Luckily for my neighbors and friends I know the citizens are different from the city. But that's been a huge challenge for me.

Just more to the directional disfunction I am feeling in my life. I quite literally have no idea what to do in the future. I hate risk, I hate not being prepared. And here I am, sitting at the cliff feeling like I am going to take a tumble and dive into the abyss.

There is only so much battling duality I can manage and this summer has taught me I just am not as strong as everyone says I am. There is a little girl inside of me crying daily for relief to come. There is a teenager yearning to hear the voices of her loved ones one more time to help her feel confident. Then, adult Ashley, grieving for the life she had six months ago. How time changes things in such a dramatic way that it was gone and I didn't even get to say goodbye.

I don't understand how people can kneel before God and put their lives in his hands with undeniable faith. God has really let me down my entire adult life. And now, when it felt like we were finally on the paths we were meant to be on, Tony has a literal fall and our futures diverts into this unknown dimension.

This has been a lot of rambling, even for me. But, I guess as my therapist might say it all needed to come out.

I know one thing, when our lives calm and we know what our future will look like, I won't forget those who helped us manage through this obstacle. But more importantly, I won't forget who left us to struggle. When I get past this mess, I know what relationships I won't waste the effort on. Because like I said, a bond is a two way deal.

I just wish that maybe for a few moments in time I could find a way each week to feel like myself, and find a way to bring back that happy Ashley, that Ashley Saturday that was in her element talking about writing and reading.

Maybe I should start with the most simplest of tasks, pick up a good book.

Next weekend is my 20 year high school reunion. The idea of seeing the people who I cherished growing up all together for the first time in decades has gotten me through these past months of muddling through these emotions. I just hope that once the 17th is gone, I can find a way to channel that younger Ashley. The one who had confidence and faith through each bone of her body. Maybe then I will be able to finish my next book. And then maybe I won't feel so alone.