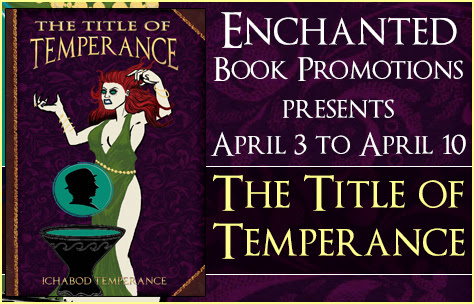 Title: The Title of Temperance
Author: Ichabod Temperance
Genre: Steampunk / Paranormal
Ohhh, my noggin. What has happened? I took a whallop upside the head and woke up in a place far from my time and home. Instead of it being the modern era of 1877 like it ought to be, I am in the distant past of England’s Dark Ages! There are mighty warriors in gleaming armour, and beautiful ladies wearing colourful gowns with taffeta secured dunce caps.
This is the castle Camelot! I am in the company of King Arthur and his majestic Knights!
Golly, can you imagine? Me, Ichabod Temperance, an Alabama tinker in King Arthur’s Camelot!
Oh, Goodness, it ain’t took too long before I already have trouble up to my hat’s brim what with Mr. Merlin, Miss Morgana, and a big mean knight in black armour getting bristly with me. Gee whiz, if I ain’t careful, I might end up wrecking there ever having been a Western Civilization!

Standing over five feet, seven inches and weighing in at better than one hundred and thirty pounds, Ichabod Temperance is ‘The Alfalfa Male.’ After lengthy music, karate, and pro-wrestling careers, Ichabod’s involvment with movie stuntwork has led him to write these whimsical, steam-driven adventures. Mr. Temperance and his lovely muse, Miss Persephone Plumtartt, live in Irondale, Alabama, USA, along with their furry pack family.

Enchanted Book Promotions Presents:Survivor of the Clan by Jennifer Ott 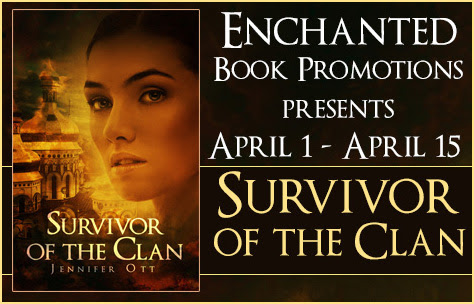 Shelby headed toward center city with determination as Damien lagged behind, casually puffing on his cigarette and checking out a beautiful woman who passed. They headed toward Shevchenko Park where dancers performed Hopak, a traditional Ukrainian dance. On a normal day, she would thoroughly enjoy the performance. Now the folksy music, the clapping and shouting grated on her ears. It wasn’t the music, nor do the dancers that bought back the memory. It was the crowds and the nervous anticipation.
Reluctantly, she wedged herself in the crowd. She didn’t want to be there, nobody did, but it was a requirement for all. Feeling him behind her did give her some relief. She leaned back against his body, holding onto his hands. He was her support, as she was his.
Less than twenty years had passed since the war had ended. It shown on all their weary faces, trying to make it through the days. The hardest task of all was to display strength and pride. The best they call could offer was solidarity, not to the State but to each other.
Soon, down the street, red banners fluttered in the breeze coming off the sea. Children in pressed, white shirts and red ties sang in unison with the melody provided by the marching band:
Dark is the night, only bullets whistle in the steppe,
Only wind wails through the wires, stars dimly twinkle.
In this dark night, I know that you, darling, cannot sleep
And secretly wipe your tears away near the crib.
Despite the military parade, the soldiers, the tanks and missiles nearing, the children’s song, the recent memory of war and loved ones who passed, brought tears to her eyes. She did nothing to dry her face. She let the tears fall, put them on display for those who may be watching. Yes, there was cynicism in mourning.
A masculine wave of shouts resounded from the men performing the Hopak. Shelby brought her attention back to the men and their dancing feats. She scanned the crowds at the faces, all tourists and vacationers, and all enjoying themselves.
On the other side of the crowd she spotted Petro, holding a girl with red hair. She stepped forward, watching him point to the dancers, and treating her daughter as if she were his own. “Amelia!” she yelled. “Amelia!” She rammed through the crowd. “Amelia!”
Damien tried to keep up, grabbing the back of her jacket to stay with her. “Shelby!”
“Amelia!” she screamed.
When she reached the opposite side of the square Petro was gone. It didn’t stop her. She sprinted down the street. “Amelia! Amelia!” Finally accepting they were gone, she stopped ready to burst into tears. She bit her lip, squared her shoulders and observed her surroundings. “They’re around here somewhere.”

Title: Survivor of the Clan
Author: Jennifer Ott
Genre: Thriller
Scottish doll maker Shelby Locke loses everything in one instant. She watches helplessly as motorcyclists assassinate her husband and abduct her daughter. Nagging questions and even confounding reminiscences only exacerbate the problem, and her geneticist father is no help.
In the aftermath of the violence, she discovers not-so-subtle hints, which prompt her to travel to Odessa, Ukraine. Upon her arrival she follows clues laid out by the perpetrators, as if they want to be discovered. What is even more shocking, she discovers her own true identity. Could she be one with those who took away her family?
To unite with her daughter, she must join forces with those bent on nihilism, and submit her loyalty to a man, whose life mission is to rekindle his long lost kin, even if by nefarious means.

Jennifer Ott graduated Albright College in Pennsylvania with a degree of Fine Arts. She also studied at the Syracuse London Center, filmmaking at NYU and screenwriting through Gotham Writer’s Workshops in New York City. Her screenplays The Tourist and Truth and Craziness were semi-finalists at Austin Film Festival. Full length novel, Saying Goodbye was honorable mention of Best Beach Book awards for romance in 2014, and novella Edge of Civilization received critical praise from the Vietnam Veterans Association. She has written numerous books of several different genres from satire, historical fiction, thrillers and literary fiction.
In the real world, away from her writing, she works as a product developer in the garment industry, which has offered her the opportunity to travel around the world. When not writing or working, she enjoys yoga, meditating and relaxing on the beach. 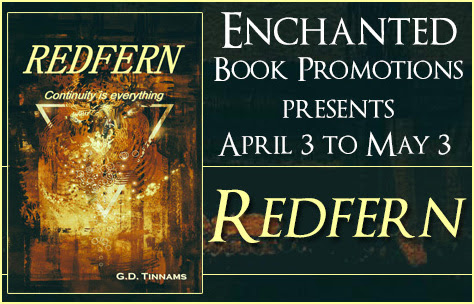