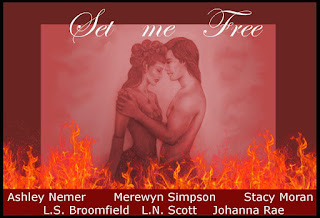 Father Giovanni felt Sera’s hand on his wound; her warm touch was sending warmth throughout his body causing him to feel rejuvenation. He opened his eyes and looked at the body that now lay on the ground before him. "Sera, what have you done, you just knocked out Renzo!" He exclaimed.

"Father, he was banging on the door trying to break in, I didn't know what to do, quick help me turn him over so I can look at the wound and tend to him." Sera dropped to her knees and tossed aside the weapon, she used parts of her clothing to blot at the spot on his head and pressed it to the wound to try and stop the bleeding.

"It's alright my child, he will come to shortly, demons never stay down long."
"Demons!" Sera dropped his head on the concrete floor and stood quickly then backed away, "You didn't tell me he was a demon."

Father Giovanni pulled Renzo's body to a sitting position against the wall then came over to Sera's and placed his hands on either side of her arms, "My child, I've known this man for several years, he's a child of God. He will not hurt you and he will help protect us from the men who await to kill us outside."

"No father, no. Demons…" She couldn’t speak, her words were caught in her throat and she began to shudder. "I..I can't…"

"Sera stop, this one is different, and he’s not like the rest now come, help me help him. You owe it to me." Father Giovanni walked back to Renzo and started to lightly tap on his cheek, "My son, wake up, it's time to face your fears."

It was as if he was being summoned from the maker up above, Renzo's eyes fluttered open and for a brief quick moment he was at piece, and then he saw her.

"You! You hit me in the head, Father, I have to get you to safety, this witch will surly kill you if we keep you around her. Come, I know a back way out of this church." Renzo shuffled to stand on his feet and regain his balance, he knew he needed to help the only one who brought him safety these last years but how had he been bested by a female?

"Renzo my son stop..." Father Giovanni was cut off when Sera stepped forward in a huff of rage.

"Me? I will hurt him, I think not, you are the one he said will bring us great danger, you are the demon! Leave us, go."

"Sera, I told you Renzo..." Father Giovanni again tried to protest but was denied a voice when Renzo stepped in front of him; he now watched two of his parishioners face off in a yelling match.

"He is bleeding; I assume you are the one to blame for this, Witch!"

"You have been chasing us; my family warned me about the likes of your kind, I should begin casting you out."

"Cast me out and no one will be able to save your pretty little bottom from the men who are coming down those stairs outside."

On and on the two of them went, the verbal sparring match becoming incessant, Father Giovanni looked around the room for a distraction, something to make them both stop and listen to reason. He saw a bucket in the corner of the room and that's what got him thinking. He walked over and grabbed the roped handle, he water swished back and forth while he hauled it across the room, splashing onto the concrete floor. The father leaned down and silently said to himself, Lord, forgive me for my sins. With one fluid motion he lifted the bucket and the water came out and soaked Renzo and Sera. The two of them both turned to Father Giovanni and looked at him with their mouths hanging open and shock in their eyes.

"Father!" The both cried.

"My children, now that I may speak." He turned the bucket upside down and used it for a chair. He sat down and placed his hands on his knees and motioned for each of them to take a seat beside him. "Renzo, this is Sera, like you, she has no one to turn to but this church and myself, she's been abandoned and is looking for shelter. Sera, Renzo like you is a bit different and is running from his past. Don't judge him for what you see on the outside, he's nothing like his family. Now my children, there are people that if I'm not mistaken are right outside our door, we need to devise a plan and save ourselves. Renzo, do you have any suggestions?"

Renzo and Sera looked back and forth at one another for a few moments in silence. Neither of them wanted to speak first but both knew someone needed to say something.

"I saw them come into the church, I followed them, there is only a couple I didn't know they were after you or I would have taken them out while in the street. If we can distract them then I should be able to take care of them. " Renzo turned to Sera and looked at her pointedly, "Are you any good at distractions, Witch?"

The three of them talked for a few minutes and devised a plan, and it was in the nick of time because the footsteps of the intruders could be heard. Renzo stood first and lined the two of them up behind him, "Sera, just like we discussed alright?"

She slowly nodded and looked up into his eyes. She could tell he cared but why, didn't all demons want death and destruction of the humans anyway, what did her life and the father's matter to him in the end?

Renzo opened the door and nodded his head, Sera, lifted her hands and started to say a small incantation he had instructed her to say in a low whispered breath. A whirlwind began to move through the hallway, dust and debris picked up through the air and Renzo watched it pass by their door. He moved out of the way and pushed Sera and Father Giovanni out into the hall way, "Down the hallway and into the other corridor like we discussed Sera, get him to safety, you promised!"

Renzo waited until he couldn't see them any longer and stepped into the hallway. The whirlwind was dissipating and he was looking into the faces of three robbed men holding weapons, humans.

"Give us the witch and we'll let you go." One said, he was pointing a spear at Renzo's body.

"We know she's in the room with you, stop protecting her." The other spoke out.

"Who cares, hang him too!" The third laughed.

Renzo took a step forward, his eyes trailed the three of them slowly, one...two...three….three...two...one...back and forth. "How about this, I kill you, and save her a life on the run, and I feed your bodies to the animals. Yes, that sounds better."


The three men looked at what had just transformed before them, the one in the middle dropped his sword and began to turn and run, Renzo jumped from his spot and landed on this man's back, pushing him into the ground. He reached down and grabbed the human's head and pulled the sound of his spine severing and cracking, his head now in between Renzo's two palms and being tossed to the side of the hallway.

Renzo turned and looked at the other two, the one with the spear charged at Renzo and nicked his shoulder, the spear broke off into Renzo's muscle. Renzo's hand went out and grabbed the man, his hand went around the humans neck and began to squeeze. He lifted the man off of the ground, the man began to scream, he begged for mercy and Renzo simply laughed. Renzo watched the man’s feet swing back and forth fighting to break free as he took his last breath while suffocating in Renzo's grasp.

The third man was frozen in place. Unable to move from shock and fear. Renzo circled him, he watched his eyes, he wanted him to see every move Renzo made. "You wanted to kill me, so now I'm killing you. You wanted to hurt Sera, what did she do to you?"
Silence, that was all that came from the man.

"I asked you a question, speak!" Renzo roared out.

In a quick motion Renzo picked up the sword from the ground and swung it around his body and sliced the man in half. He watched the top half of him fall to the floor then watched the lower half topple over right after.

Slowly his body started to shift back to it's normal size and shape, he hated when he went into demonic form, he hated the looks and stares. That wasn't him, but it did get the job done.

Sera watched from down the hall, she heard the screams and every word that had transpired.

"Sera where are you going?" Father Giovanni asked.

"To help him clean, he's wounded."

Email ThisBlogThis!Share to TwitterShare to FacebookShare to Pinterest
Labels: Set Me Free