The English translation of 'Chronicles of a Harry Potter Fan' is now available on Amazon and that is why we're organising this blog tour, starting on the 22nd of July and ending on the 5th of August.

'Chronicles of a Harry Potter Fan' is Thoma's biography, chronicling his years running some of the most influential Harry Potter websites and uniting fans globally. 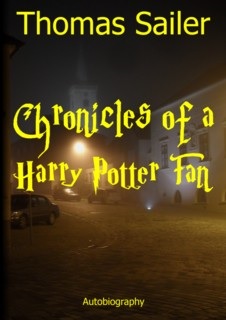 For many years, Thomas Sailer was active in the virtual Harry Potter fandom: After he had developed a huge fancy for the story in autumn 2004, he started to help out on the renowned fan portal ‘Emma Watson Empire’ the next spring; and it did not take long until he advanced to the site’s representative.

Two years later, he founded the ‘Knight Bus’, a widescale directory for Harry Potter websites. And finally, he even tried to mobilise fans from all countries by means of an organisation.

During his years as an active member of the fan community, he has accomplished quite a lot and made contacts to fans and website owners from all over the world. However, what he has basically intended with his activity, did not happen to become real.

In this book, he talks about his work in the international fandom, his motives and how the Harry Potter story has influenced his life.

When first released in November 2012, the original German version of the book caused a stir within the fan community: Although it has never been on a bestseller-list, there appeared to be several reports about Thomas Sailer’s story on many fan based websites from all around the world.


The Author’s Words about his Book:

Hello there, this is Thomas Sailer, author of “Cronicles of a Harry Potter Fan”, speaking about my book here at Memories in a Box.

Looking back now in 2013, it has been a long while since I started becoming active in the online Harry Potter fandom: I remember clearly when, in the spring of 2005, I started looking for HP sources on the web – eager to get active in one of these communities. For me, being a fan always meant more than just enjoying the books and movies. I wanted more … and I wanted to get involved.

As I always try to find ways to change my dreams into action, I managed to work my way from a normal fan up to a recognized name within the virtual Harry Potter fandom. And, for a very long time, my activity in the fandom appeared to me like a window and maybe even a possible gateway, to something amazing.

What I really enjoyed about my work was all the creative projects which I thought up and later put into practice. I loved the various tasks which this activity gave me. For instance, to inform other webmasters about project ideas or to work in my friend’s garage and try desperately to complete a wooden keepsake box for Emma Watson’s 18th birthday from the fans.

In the course of my project activities, I got to meet many new people from all over the world; many of whom I am still in contact with and enjoy talking to from time to time. They were webmasters, staff members of Harry Potter sites or normal fans who did not  take part in the virtual fandom the way I did. It was a real pleasure to meet such a variety of new and interesting people.

The decision to write a book came along at a time when I felt like I was over and done with HP. In the end of 2009 I started to realise how many things I had done, moved and achieved within the HP fandom. So I considered it a great chance to gather my memories and thus share my experience.

Writing this book did not happen at once; I had to interrupt my work very soon, as it was some weeks before Christmas and I had no idea how to get all my stuff for university done. And in the beginning of the new year, I had the incentive to write a novel – what put this project on ice for the moment. Further, I was not able to put a proper ending to the book, as at that time I was not finished with my activity in the fandom.

Almost two years later, in the last days of December 2011, I made the decision that it was time to finish this book. So, along with writing my second novel, I completed it during 2012. It was a great experience to confront myself with all those memories once again and to work them out a structured book. 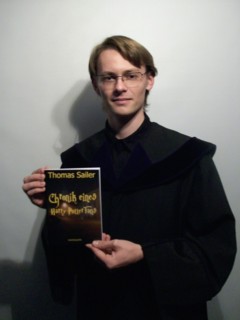