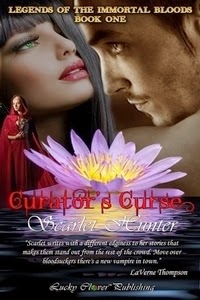 Source: The author gave me this copy for an honest review

Purchase the book on Amazon

The strongest Curator of the Immortal Bloods, a vampire, gifted with an array of powers, Larken yearns for the female who watched him from a distance. Because as she spied on him, he spied on her. A lady deemed forbidden to one such as he. Yet, Larken fought against all warnings to stay away and succumbed to her silent temptation. And a night that changed his destiny and hers forever.

Layla, a spirit-demon, had been hiding from her father, the king of hell, for two hundred years. Taking refuge in the fortress of the Immortal Blood vampires, she swore to the council never to acknowledge who or what she was to anyone. Until one night, her self imposed isolation is breached when she is approached by the one male vampire she’d watched from the shadows for years. She knew she had to stay away from him. For only he was capable of triggering an evil inside her. And yet for one night she gives in, but her dark secret can bring down the entire race of the Immortal Blood vampires.

This book has a lot of potential. The ideas beind it were good and it made me want to know more about the world that was created.

I think the my biggest issue with the book is it felt some what disorganized. I didn't realize we were in the middle of a flashback until the end and that had me very lost. I wished that parts of it were elaborated and not rushed through because i wanted to know more about the cahracters.

It wasn't a hard book to read, I didn't struggle getting through it. I wished that the main characters had more of their back story and why they were in love with each other. It was obvious they cared but I just wanted more. Which isn't a bad thing.

This is the first book of Scarlet Hunter's that I've read and I would read another title from her.