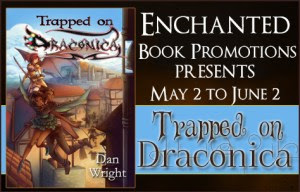 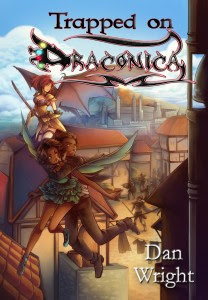 Title: Trapped on Draconica
Author: Dan Wright
Genre: Fantasy
Barely into his teens, Ben Anthony has not had it easy. With his father in prison, his mother struggling to keep him under control and his friends little more than criminals in the making, Ben is already on a self-destructive path. But his life is about to get much worse.
Teleported to the world where dragons once ruled, Ben finds himself the target of the malign Baalarian Empire – of which Emperor Gothon seeks to capture him for reasons yet unknown. Teaming with warrior Princess Daniar Dragonkin, her altruistic sister Erowin and the revenge seeking Leonidan Prince Kalak, Ben sets out on a reluctant quest to find his way home. And thus begins his incredible adventure… 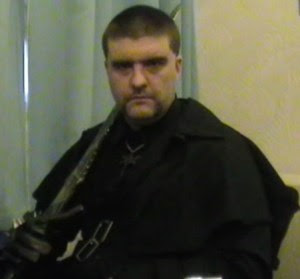 Dan lives in the United Kingdom – born in the historic town of Canterbury, Kent. He picked up a love of Fantasy stories after reading such classics as The Lord of the Rings, The Lion, The Witch and the Wardrobe and numerous Roald Dahl novels.
His biggest influences are Douglas Adams, Alan Moore, Stan Lee, J.R.R. Tolkien, Joss Whedon, H.P Lovecraft, Hiromu Arakawa and George R R Martin. He is highly influenced by Anime, Video Games and Comic books. He has also written a fan parody series on YouTube called Totalitarian Warlords and Termination Squadron.
As well as writing, Dan plays guitar in a metal band. He likes all kinds of music—but he mainly listens to rock and metal, rap, some pop music and also film and video game scores. He also loves Disney and Pixar movies—often finding himself singing along to the tunes, or crying manly tears!

He is also a slave to his cat, who takes up a lot of his time when he isn’t at work or writing!
To learn more about Dan and the world of Draconica, visit the following places:
Blog: http://pandragondan.weebly.com
Draconica Website: http://draconicaseries.weebly.com
Facebook: https://www.facebook.com/TrappedonDraconica
Twitter: @PandaDanWright