Have you ever seen a house get raised in the air before? Well prior to Friday the 17th I hadn’t either. My husband and I bought a house in June that was apart of the FEMA Grant process for a house elevation. We had no idea what all would go into this process so when they showed up last Monday, we were in shock at the amount of dirt.

In just about three days we had amassed huge piles of dirt that I was sure would leave us with a mud bath everywhere. There were holes dug under our house for tunnels that spanned the entire house length. 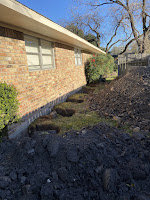 The dogs were going crazy, poor Toto & Doogie. What those two pups must be thinking as they watch this going on. Their favorite thing is to chase squirrels in the back yard and now they are only allowed out via leash. It’s really put a damper in their day, we can tell.

Not to mention that taking Doogie out for his 20 trips to go potty is really annoying, it’s the small things that get cha....

Then, the mud ... everything was going fine until Mother Nature decided she needed to have a rain storm. That’s when my pretty white tile floors got a paint job. All in brown. 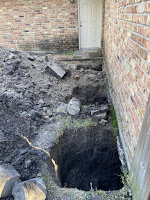 Doggie foot prints, teenager shoe prints, husband boot tracks, my own imprints here and there. Mud and dirt literally everywhere. It was almost like there was no point in even moping because literally the next hour it would be back.

Talk about a pain in the butt! 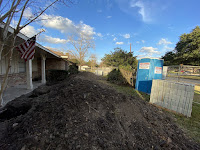 The city applied for a grant and since our home had been apart of these tragic events from previous owners they were eligible for this program. We were lucky because the program was transferable when we purchased the house. It received 18 inches of rain inside during both events from what we were told. And the program requires homes to become elevated 18 inches above BFE. That’s how we ended up 44 inches in the air.

It was truly crazy watching. I was worried since it had been full of rain for almost a week. It was off and on rain, misty, and just kinda blah. So when I was told we were still on pace for elevating Friday it was a huge relief. Because the sooner we elevated the sooner the mud left my home.

I took video’s of the elevation, my kids even got to help. The company that performed the work, Planet Three Elevation has been really great. I can’t wait to see what the finished product will look like.

We were heartbroken when we lost the front shrubs in our yard, so the whole landscaping will be new for us. Since this is the first home we have owned we haven’t had to do this before. In some ways it is exciting because in a year whatever is growing will be what we did on our own.

Hopefully the project only has four more weeks left ... hopefully. They said as short as 45 days as most as 70, depending on the weather and complications.

It’s been one wild and crazy experience and it is only 13 days in so far. Can’t wait to see what the other 30 bring!

Take a gander at this video, it is amazing what technology can do. It really really is.