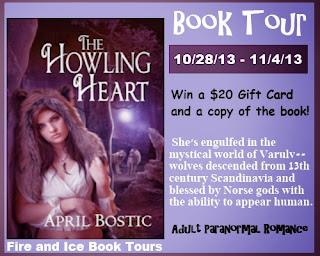 Here is a Link to her Tour

Paige Donovan is an ambitious college graduate who aspires to reach the top of the corporate ladder. She’s climbing fast when given the promotion of a lifetime at a prestigious fashion magazine in New York City. Her bright future comes to an unexpected halt after news of her father’s death. She inherits his old cabin in the Colorado Rockies, and just when she thinks her luck couldn’t get any worse, she has a car accident in the mountains and awakens in the small, remote community of Black River.

Soon, she’s engulfed in the mystical world of Varulv---wolves descended from 13th century Scandinavia and blessed by Norse gods with the ability to appear human. Paige is desperate to return home, but never expects to fall for her rescuer, Riley Gray, a charming young werewolf from England who offers her an alternate future with his pack.

Riley walked away and took a few steps toward the river. With his back facing me, he stood while looking at the waterfall. It was a beautiful scene—his tall, shirtless body with his blonde hair tousled and gently blowing in the wind. He took another step and surprised me by kicking off his boots. Then, he leaned down and rolled up his pant legs. He jogged over to a cluster of large rocks, his footing quick and poised, and sat with his bare feet dangling in the water.
I yelled out, "Is it safe to do that?"
He looked at me and laughed lightly. "Yeah, it’s safe. Do you think there are piranhas or crocodiles in the river?" He continued to chuckle, and a toothy smile broke free on my face. "Don't worry. There isn't anything deadly in these waters—just harmless fish, frogs, and Northern Water snakes. They won't hurt you." He beckoned to me. "Come over here and join me. The water is nice and cool." He kicked his feet, making splashes in the water.
I was hesitant to join him, but the water intrigued me. I decided to trust him, so I walked over to the rocks. They were flat, smooth, and slick. My steps were wobbly as I tried to avoid getting a foot stuck in the cracks or slipping on the moss. Once I stood next to him, he looked up at me with a wide smile. I removed my sneakers, peeled off my socks, and rolled up my sweatpants. Riley was right. The water was pleasantly cool and refreshing.
He kicked his feet again, this time making a bigger splash. I tried to outdo him, but my smaller feet were no match for his large ones. We laughed together, but the rushing water overpowered the harmonious sound.
I stole a glance at him while he looked at the river. He leaned back casually on his elbows, and I couldn't help but admire his six-pack abs and toned chest. Little, brown moles spotted his torso, and I imagined playing connect-the-dots with my tongue. His skin enticed me, and I wanted to run my hands all over it. A lustful feeling washed over me, and I swallowed thickly, averting my gaze.
Riley chuckled low in his throat, and I knew he caught me staring. His hand touched my lower back, and I looked at him over my shoulder. A grin spread across his lips as he tugged the shirt hem.
"This is my shirt, isn't it?" My eyes widened, and I whipped my head around. In less than two seconds, my face flushed with heat.
"Um, yes," I mumbled. "Sorry. I borrowed it, because Quinn's clothes were too small for me, and I didn't feel comfortable browsing through Celia's wardrobe." The latter reason was a lie. I was just determined to cover myself with his clothes.
"No worries. I don't mind," he soothed. "You can borrow whatever you want. What's mine is yours, love."
I turned my head slightly to peek at him, grateful his focus was still on the shirt. I recalled the words he spoke earlier. "Let's say hypothetically I did stay here with you. How would we be together when I'm human and you're a wolf?"
"If you're referring to us being biologically compatible, Máni and Freya blessed us, so we can breed with humans."
His foot brushed against mine under the water. It came back a second time and then a third. He sat up and scooted closer to me, until our thighs were touching. I looked over at him and almost fell into his seafoam pools. I had to regain control before I did something I would regret...like lean over and kiss those bee-stung lips. 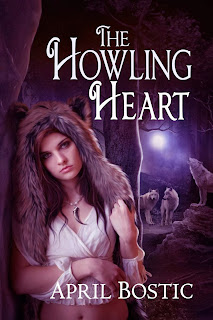 April Bostic is a New Jersey-based, Adult Romance author who enjoys unleashing her creativity and letting her imagination run wild. Her love of romance books inspired her to become not just a reader, but also a writer. In December 2008, she self-published her first novel, a contemporary romance with a supernatural twist entitled "A Rose to the Fallen".

After five years, she released her second novel, "The Howling Heart" in August 2013, a paranormal romance that delves into the mystical world of werewolves and Norse gods. To end her busiest year in publishing, April will release her fourth short story in December 2013, an 18th century paranormal romance entitled "A Dark Scandal".

April is giving away a $20.00 Amazon or Barnes and Noble gift card (winner's choice) and a copy of her book! Enter through Rafflecopter. The giveaway is the same dates as the tour.
a Rafflecopter giveaway