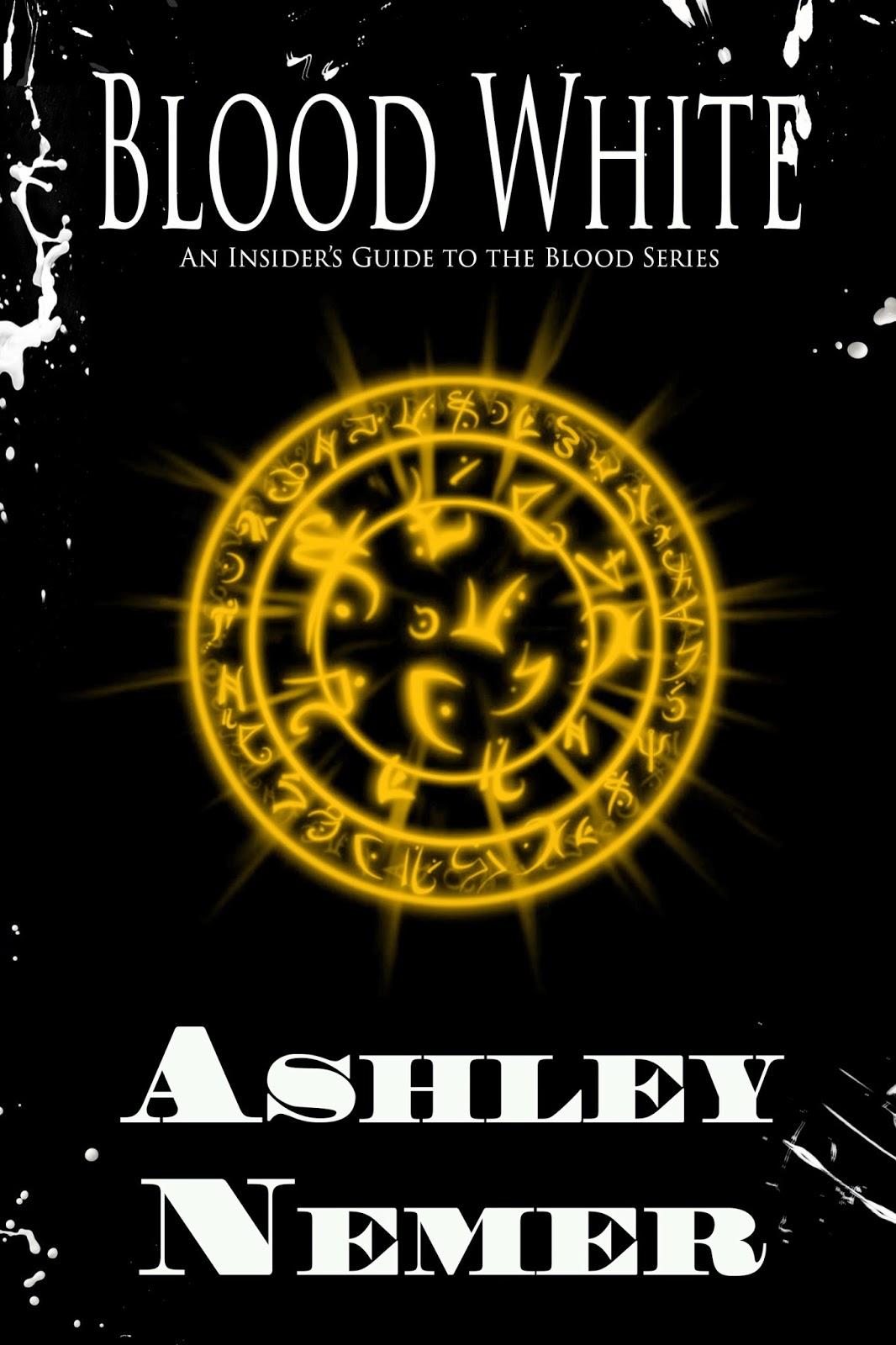 Blood White contains a novella, Blood Gold and deleted scenes, interviews and other extra tidbits from the blood series that could not make it into the other three print novels.
This is an Insiders Guide to the Blood World.

Do you wonder how the Algula race came to be? Or how Earth and everything we know have been manipulated over time and the world we think we know isn't even close to what reality is.

Take a step back in time with Blood Gold, the short story inside this book to discover the truth about our existence and how we really came to be called humans.

Also inside this book discover what makes the main characters tick as you take a journey into their thoughts with interviews with King Zayn, Princess Nikole, Princess Leigh and Princess Haydar. As an added bonus enjoy deleted scenes from the Blood Series Trilogy.

Author Bio
Ashley, also known as Niki Becker, is married and lives in Houston with her husband Tony. They have two dogs, Toto and Doogie. They have been together for over 9 years and he brings her more joy than she could ever imagine as a child. She loves to read and has been hooked on the romance genre ever since her lifelong best friend gave her "Ashes to Ashes' by Tami Hoag to read when they were younger.
Ashley finds her strength through her family, especially her parents. They always support her in life; they push her to strive for greatness. There once was a motto that Ashley heard in her youth through her Taekwondo life 'Reach for the Stars' and that is what Ashley has always done. It was through her upbringing that the values Ashley has and displays come from. With her parents always cheering her on in life she was able to grow up having faith in herself and her ability to conquer the world.
Ashley enjoys writing many different genre’s of fiction. Her areas range from science fiction/ paranormal, mystery, romance, poetry and erotica (using pen name Niki Becker.)

CHAPTER ONE
The beginning of the earth’s creation …
Fire and lightning flared around the mountaintops of Har ha-Elohim. The air whipped back and forth while the four Gods paced up and down the valleys. There was a storm brewing in the air. The taste of salty rain touched the four tongues of the deities who were invading this new realm.
“Isaf, it is time to make this land flourish,” Hubal commanded. He raised his arms out past his sides, over his shoulders, and then above his head. The rain began to beat down on them, growing stronger with each inch his arms moved up his body.
“Hubal, what do you want me to use as a starting point?” Isaf moved over to stand next to his leader. Each step that he took made the ground beneath him rumble.
“Take this land with you; we will make a new home on this plane called Earth. We will be Gods greater than all others. Our pantheon will not only have our realm, it will have a planet to claim as well.”
Tornadoes and water spouts started to form along the land and lakes. Na’ila came behind Isaf and stood next her bonded mate. Hubal watched her take Isaf’s hand, and then he motioned for Manad to join them in the valley.
“Sun, moon, ground, air, water, all of us joined together, we will create the greatest place in all of eternity. We will create Earth.”
The four deities held hands in a circle and began to chant low. Their voices carried over the plains and through the valley. Isaf’s ground started to move under them, and within a few hours, their reality changed. They began to watch as trees, rivers, grass, shrubbery, and sunlight became their surroundings. When they let go of their hands, a loud, cracking thunderbolt went off in the sky. They looked off to the east and knew that their enemy, Zeus, was casting them out.
He’d cast them out of the realm of other Gods, the place they had known as their own for their lifetimes. He had cut them off from their families, mates, and children alike. It was up to these four beings to bring life to this new planet, make it flourish. Hubal knew that once this was a success, they would be able to go out and claim other parts of the galaxy, and eventually the other Gods would seek out their creation as a new place for escape, peace, and freedom.
“We did it,” Manad said. He broke free of the circle and ventured off into the west. He moved across the grass, the sun following him along his journey.
“Look how the blades of grass follow the light. They move in an east to west pattern,” Na’ila noticed.
“Manad doesn’t know how powerful he is going to be here on this new planet. Everything will rise by his command and set by his slumber.” Hubal could see into the future. He could feel and taste what their paths held for them all.
“And what about you?” Isaf said. “What happens to you when your friend is off walking away?”
“I’ll follow him. Every day, when his sun sets, my moon will be there to catch him and follow the same course he took that day, cleaning up any mess that might have been left in his wake.”
“And this is the life you want for yourself?” Na’ila’s disapproving gaze wasn’t missed by the two other Gods standing there.
“No, it is my duty to protect us all. I brought is here; I will see that we all thrive.”
“Then let us begin the creation of this new realm.” Isaf kneeled on the ground. He placed his hands palm down on the fresh blades of grass. His magik was different. He balanced himself out. When in one section he created earthquakes, in another he created mountains. He brought land and water together before he was done, and a solid continent was formed, a vast and glorious creation.